So I decided after uni work has finished to start working on getting better at the areas I knew wasn't as strong as my main skills, This included sculpting and texturing within Zbrush. For this I decided to create a simple Shield asset which would then be textured as a stylised piece to improve and widen my skills in texturing.

Started the project in Max by blocking out the shapes. I then made two different models the base mesh to which would be used for games and a high resolution mesh which would make sculpting easier. 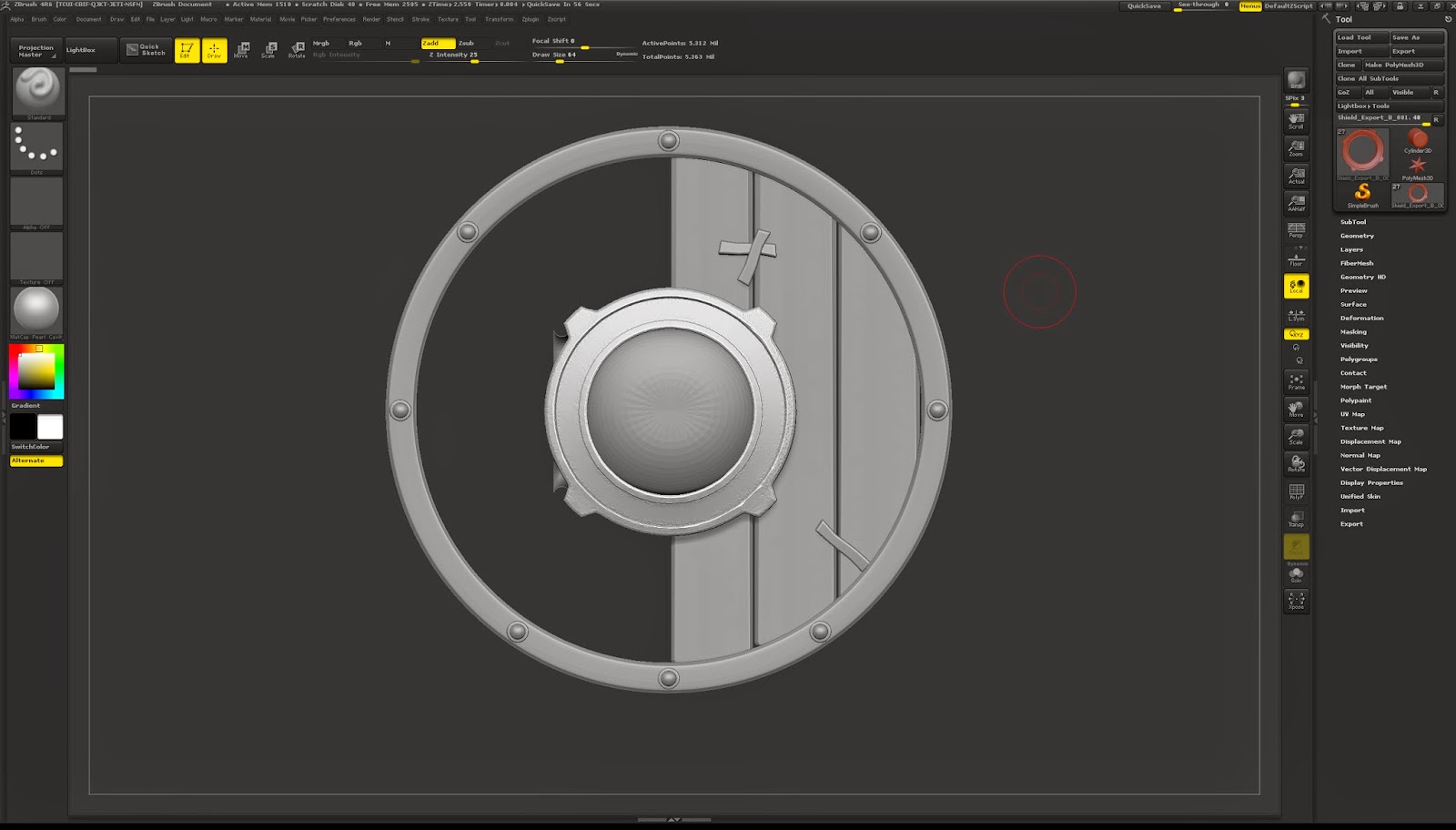 Once the mesh was completed I imported the mesh into Zbrush. As you can See there is only half the wooden planks as I will be mirroring them over. 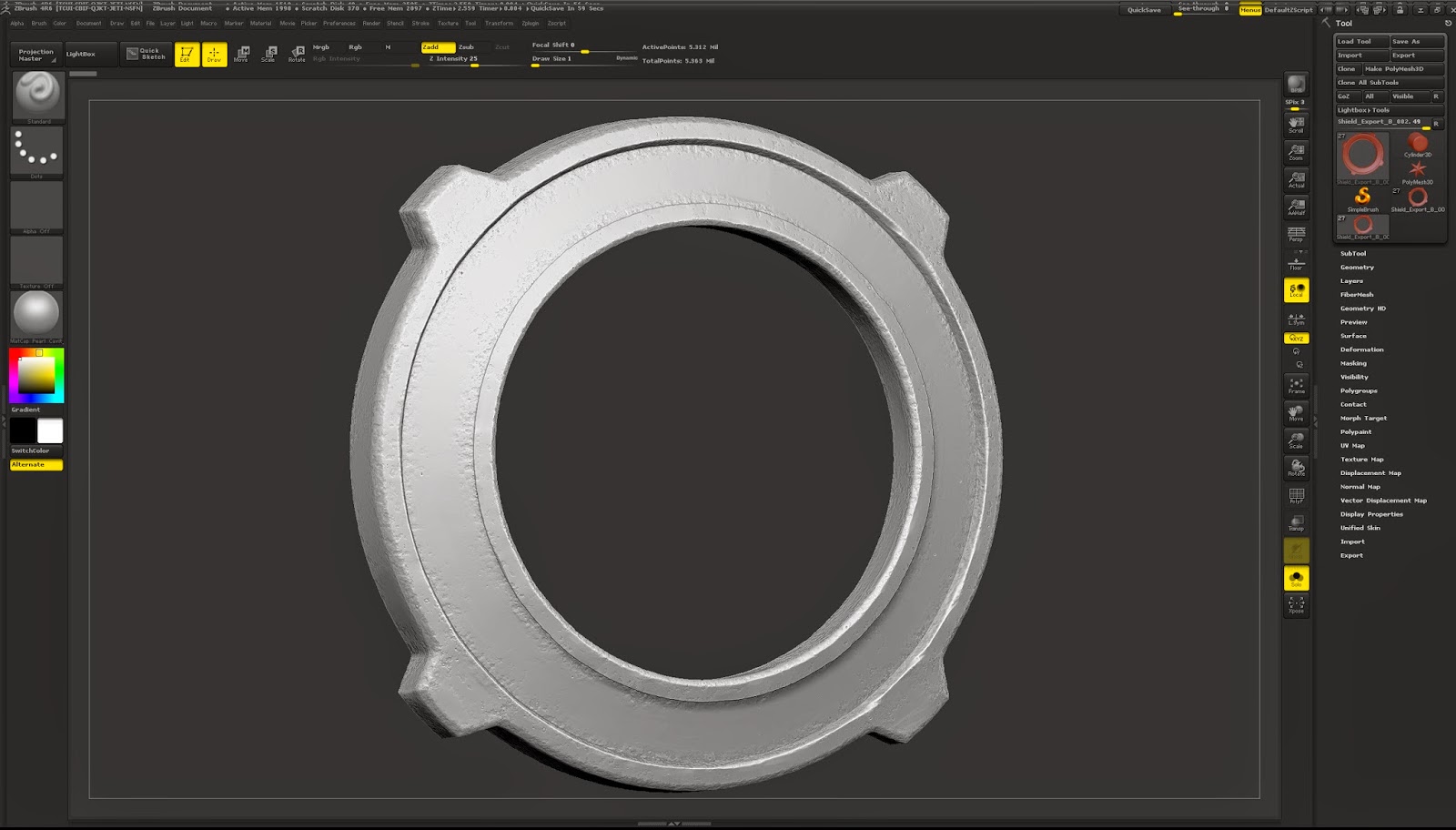 I then started the sculpting by subdividing the centre piece and adding noise. I used layers in my method as it allowed me to control the amount I wanted after finalising the outcome. It gave me more freedom to play around after. I then used the trim dynamic brush to smooth off the roughness to add more realism to the sculpt. 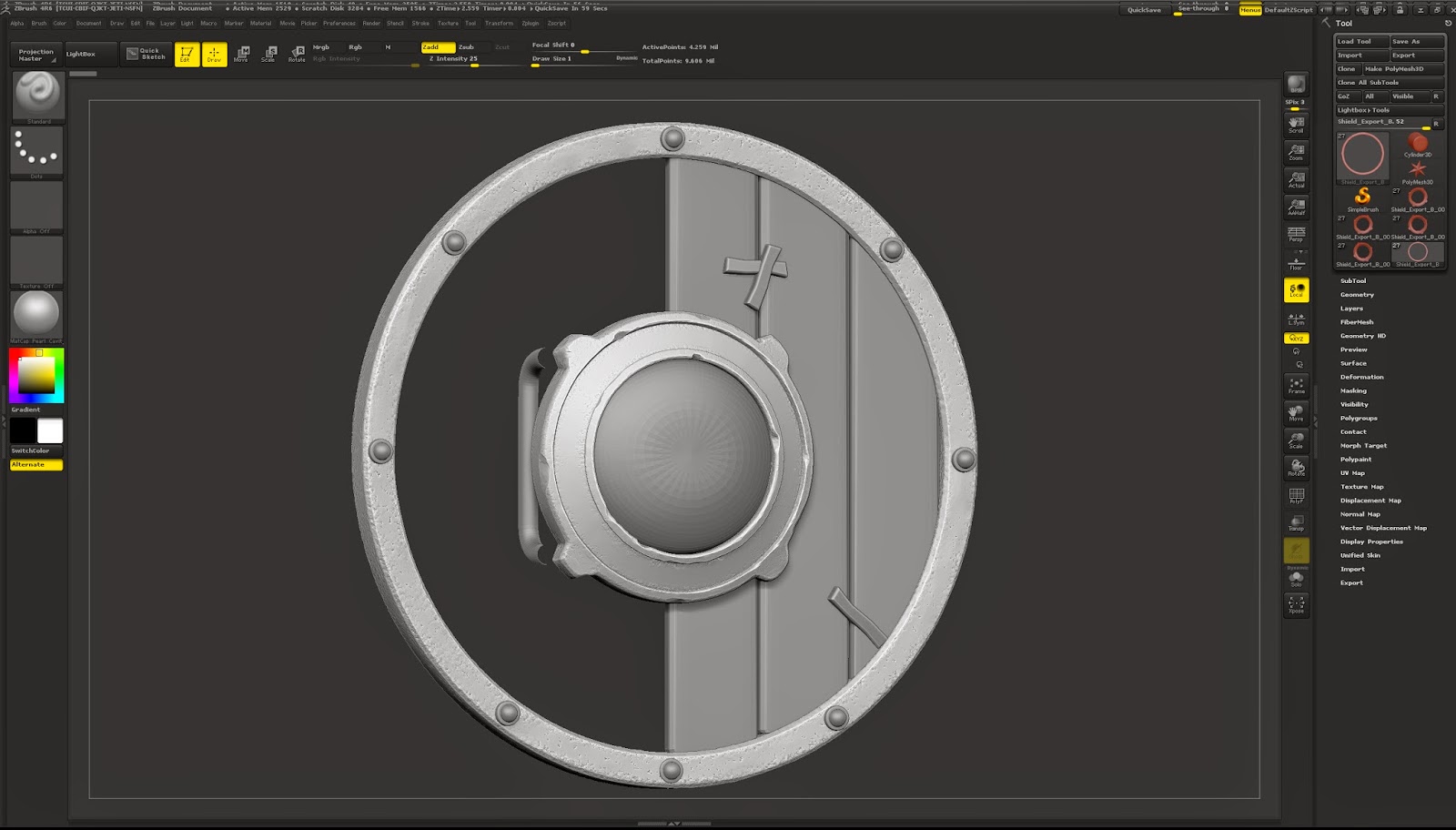 I then finally added some dents into the centre piece using the same brush. I moved onto the second main metal piece the outer rim. For this I used the same technique as the centre. 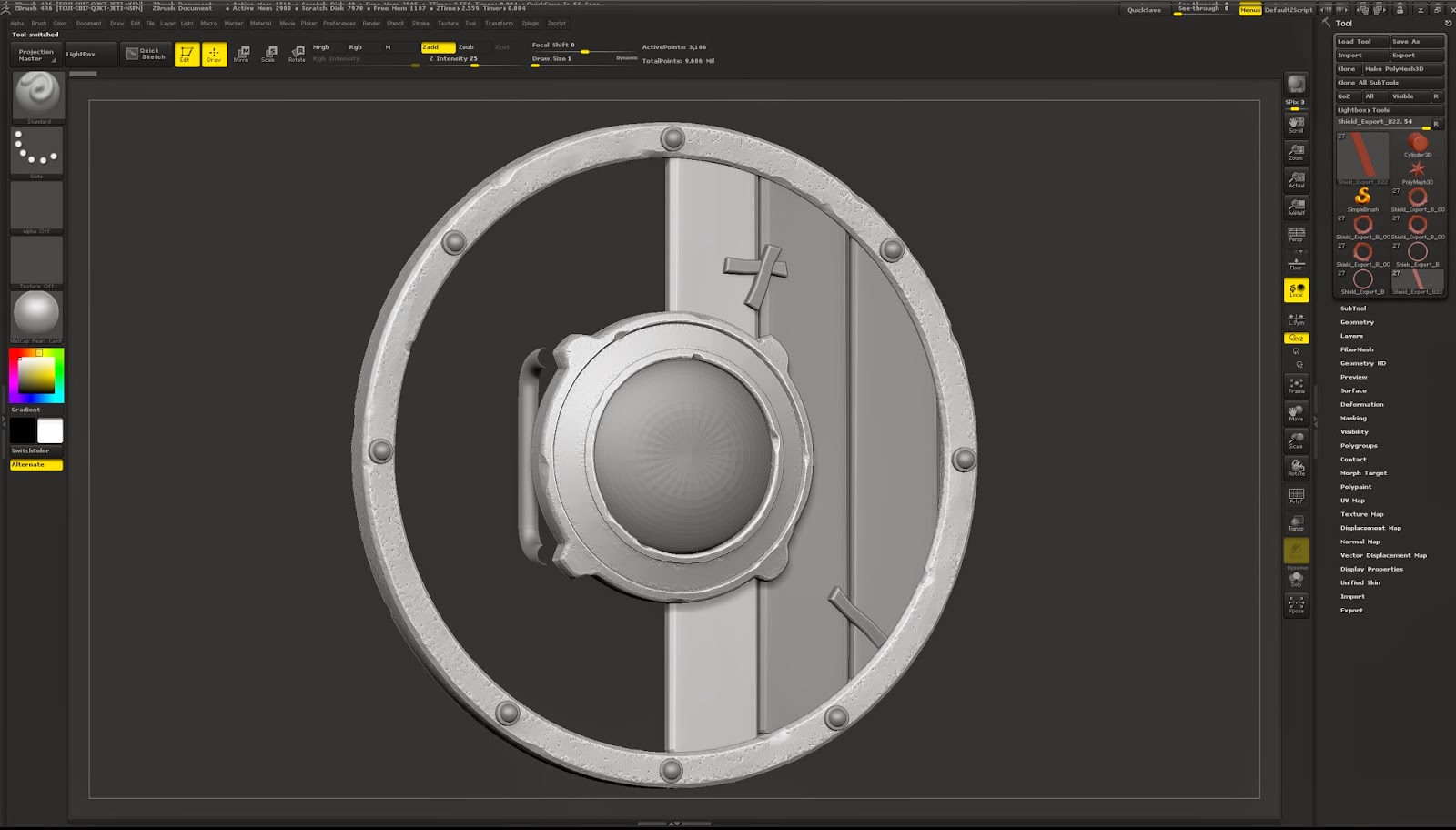 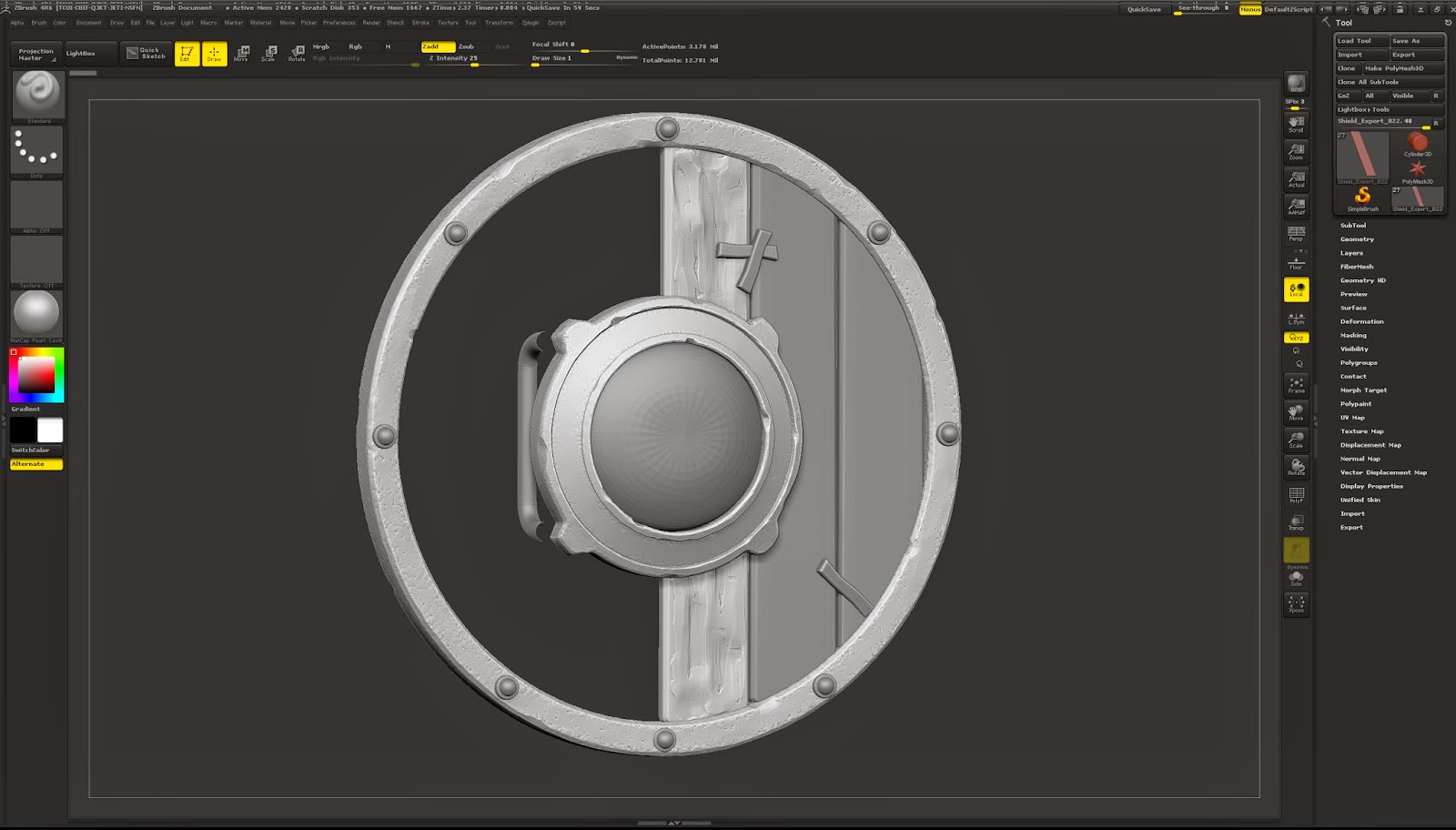 Moved on to the planks now and I used the clay brush to add depth and character, after which I then smoothed with the Trim Dynamic brush. 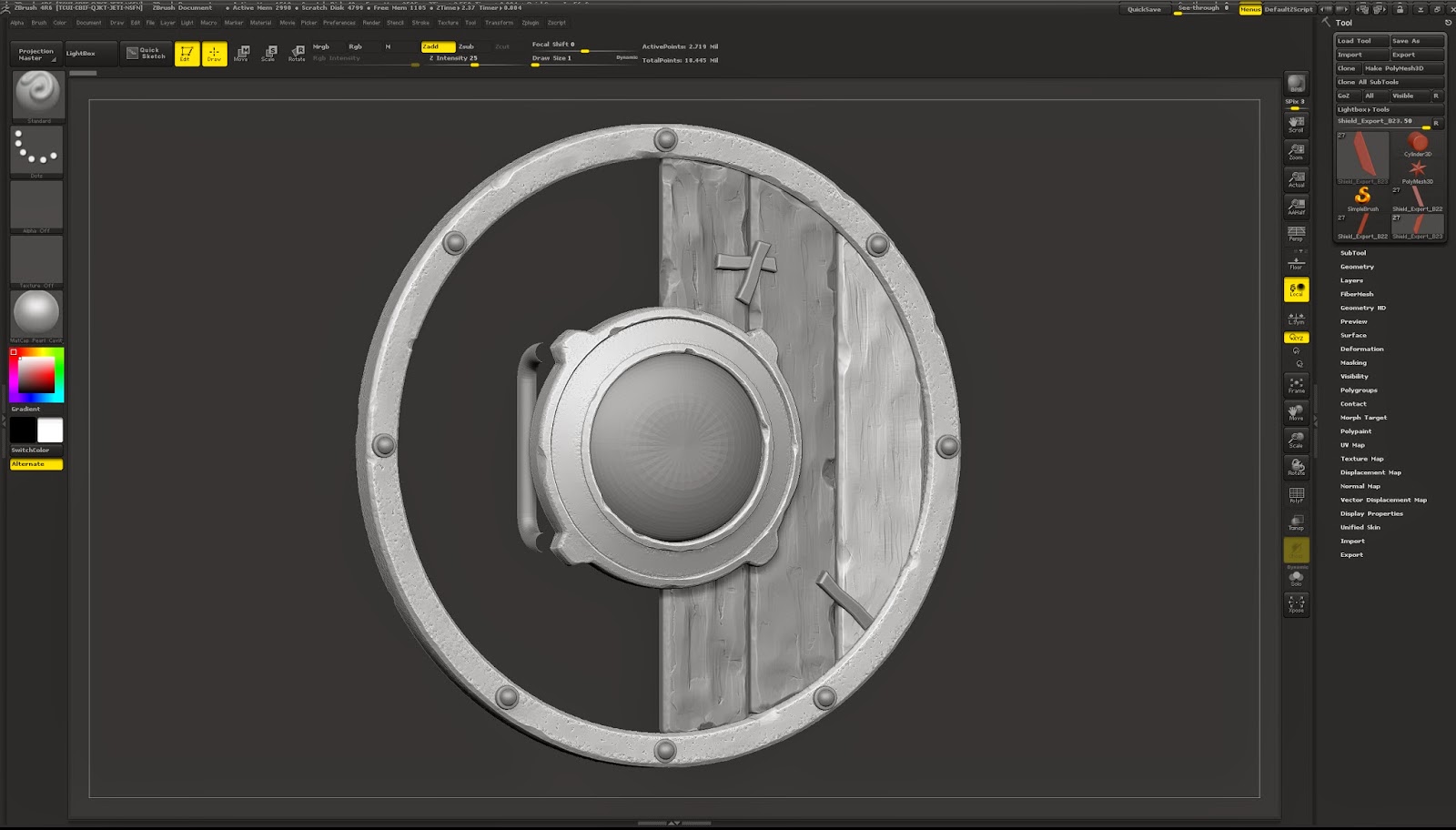 I followed this step for all three planks both front and back. 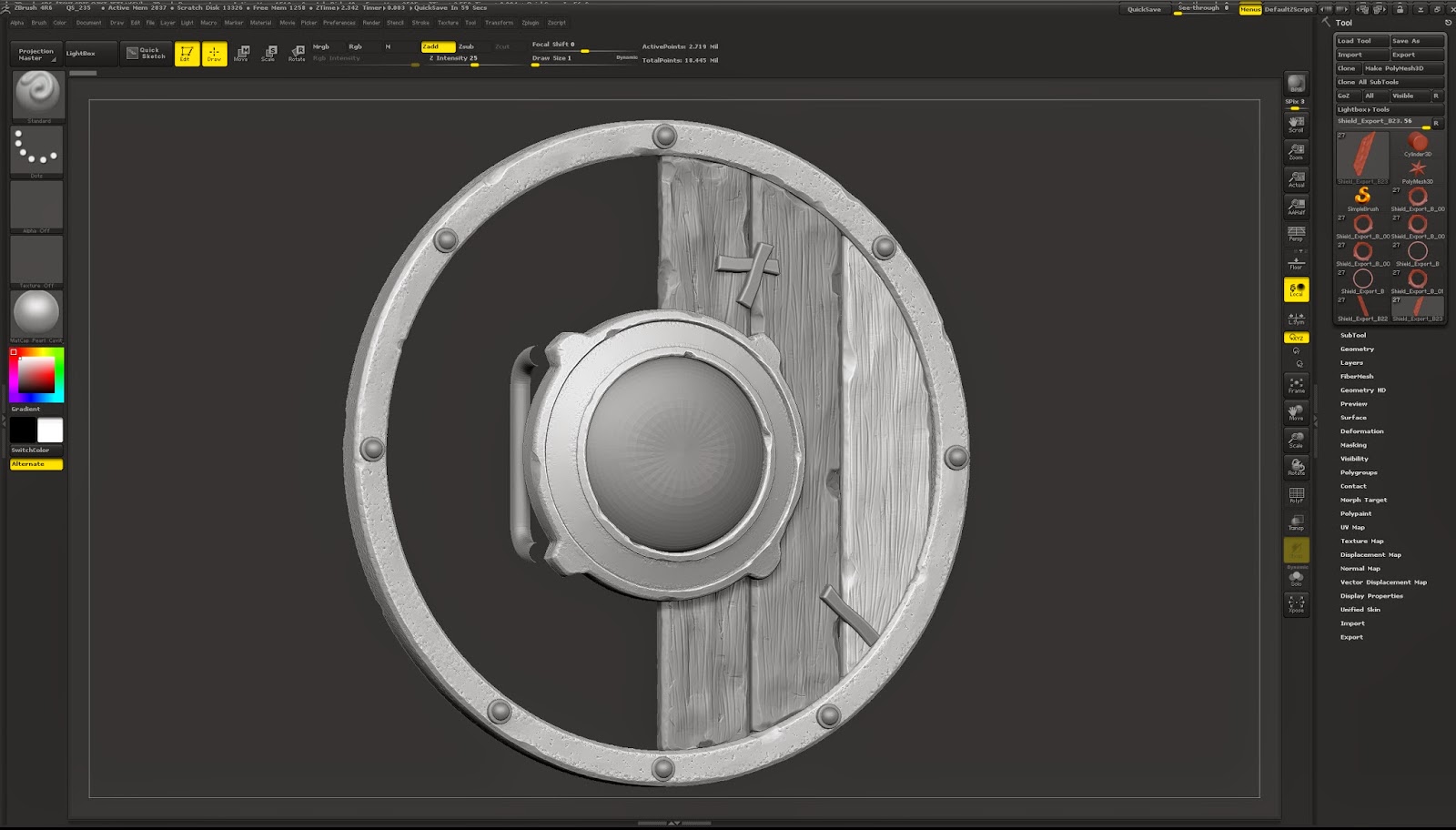 I then added in the grooves using the Orbs crack brush. Which I then controlled the strength with layers again. 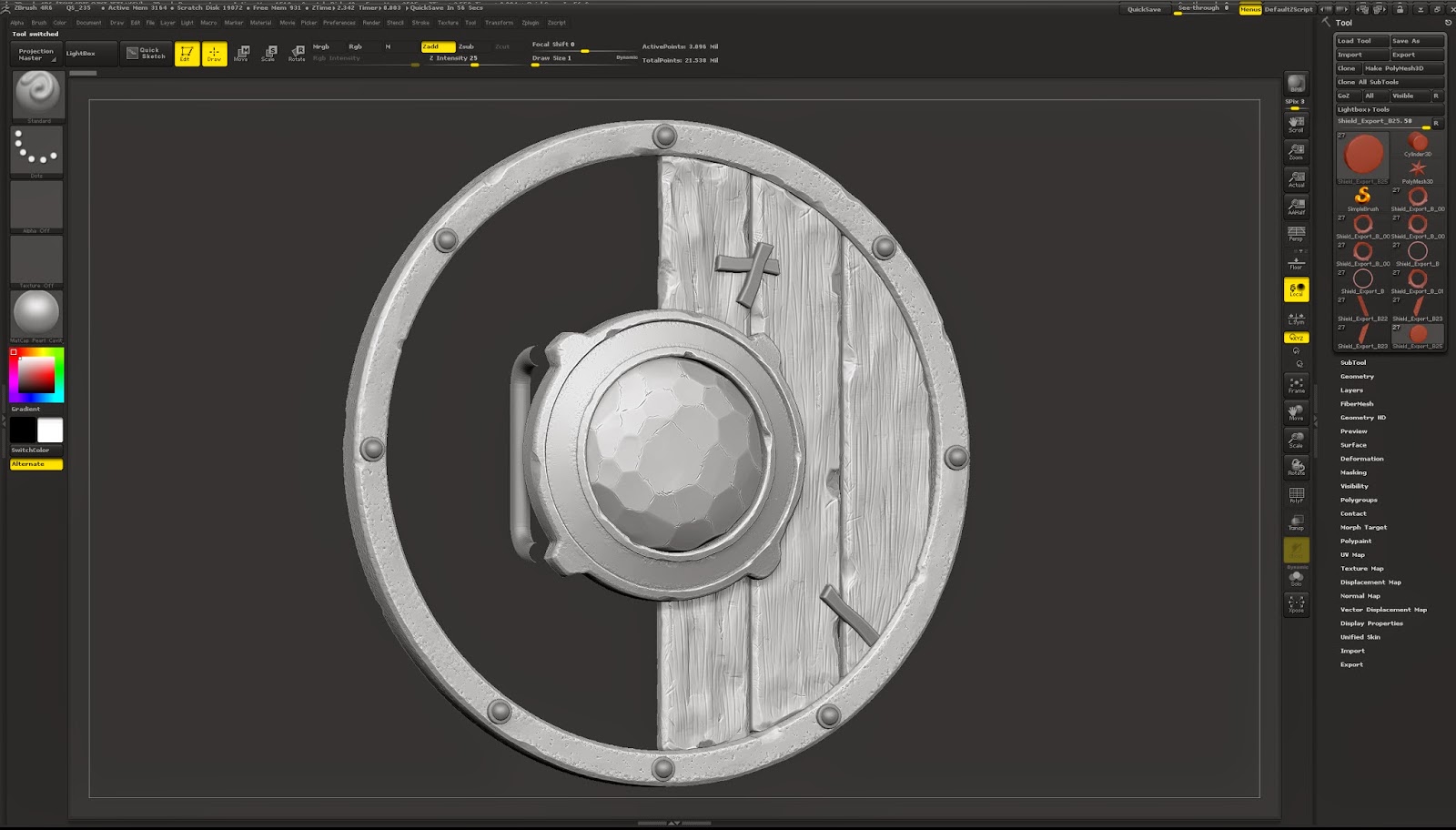 After finishing both the front and back of the planks for the time being. I moved onto the middle round piece by using again the Trim Dynamic brush I flattened areas off. I then used the Orbs crack brush to add small scratches. 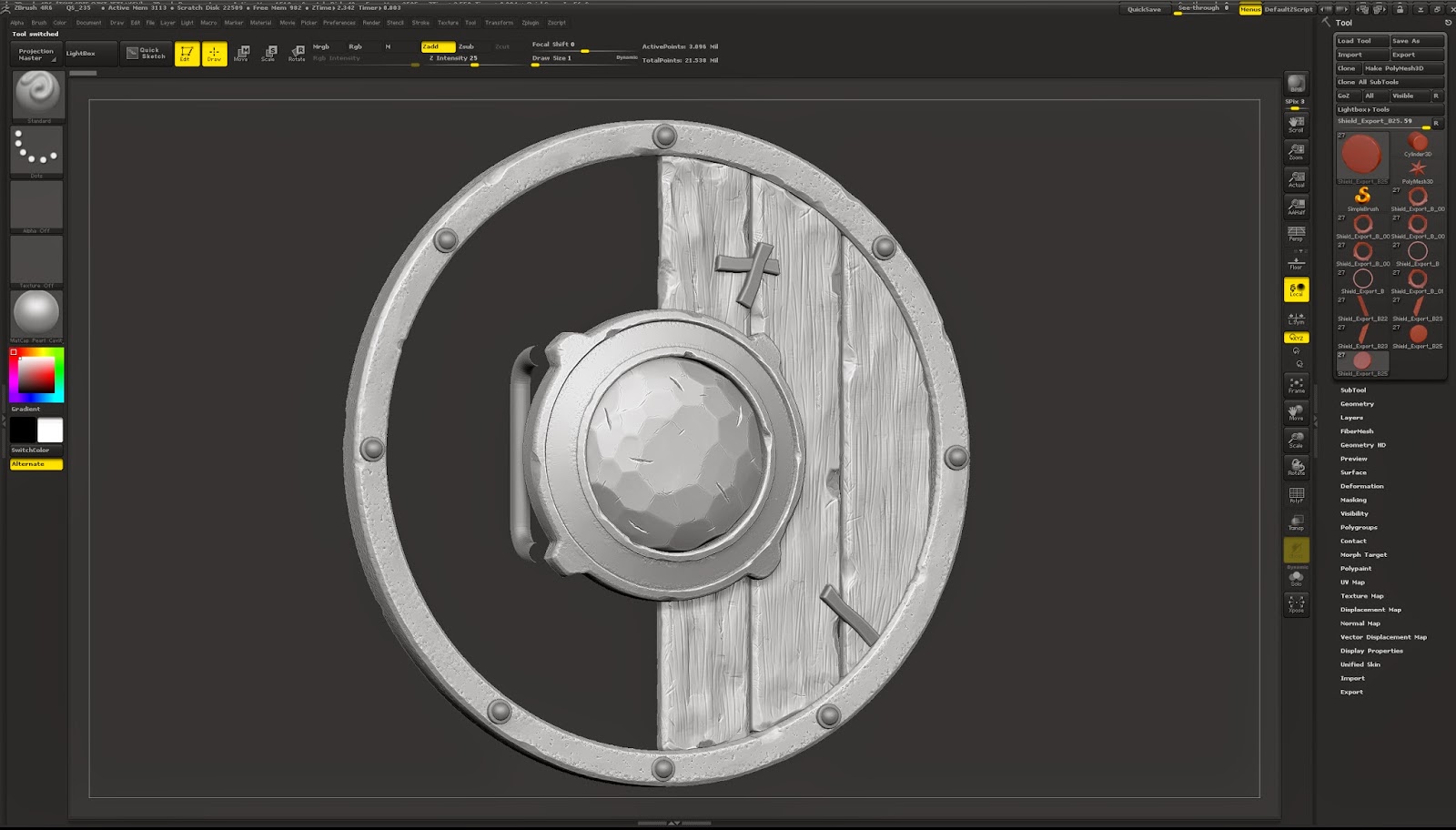 I then added in big gash marks to make it look beaten up. 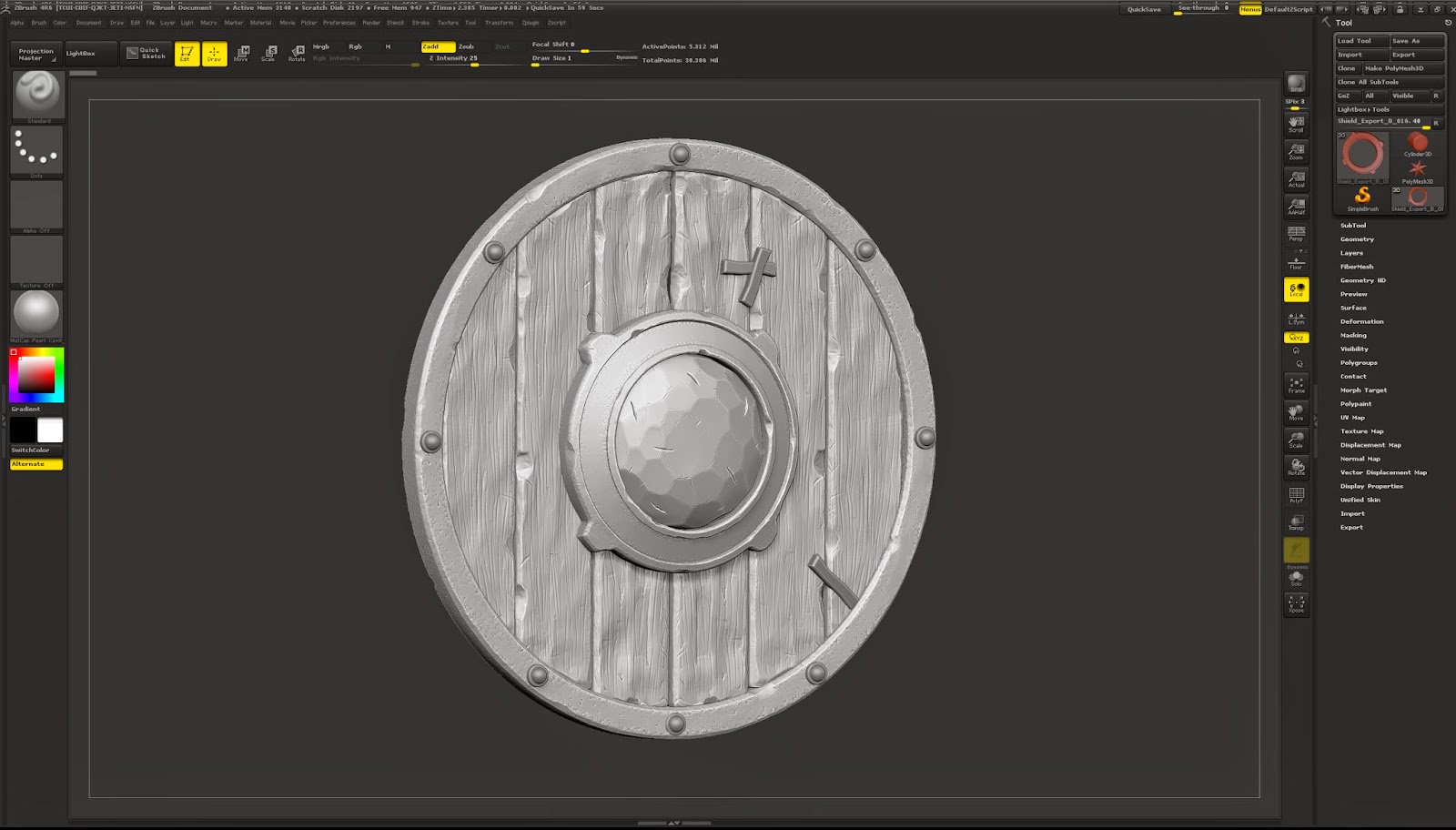 For me to get a real sense on what it would look like I mirrored the planks over in Zbrush to see the final outcome. 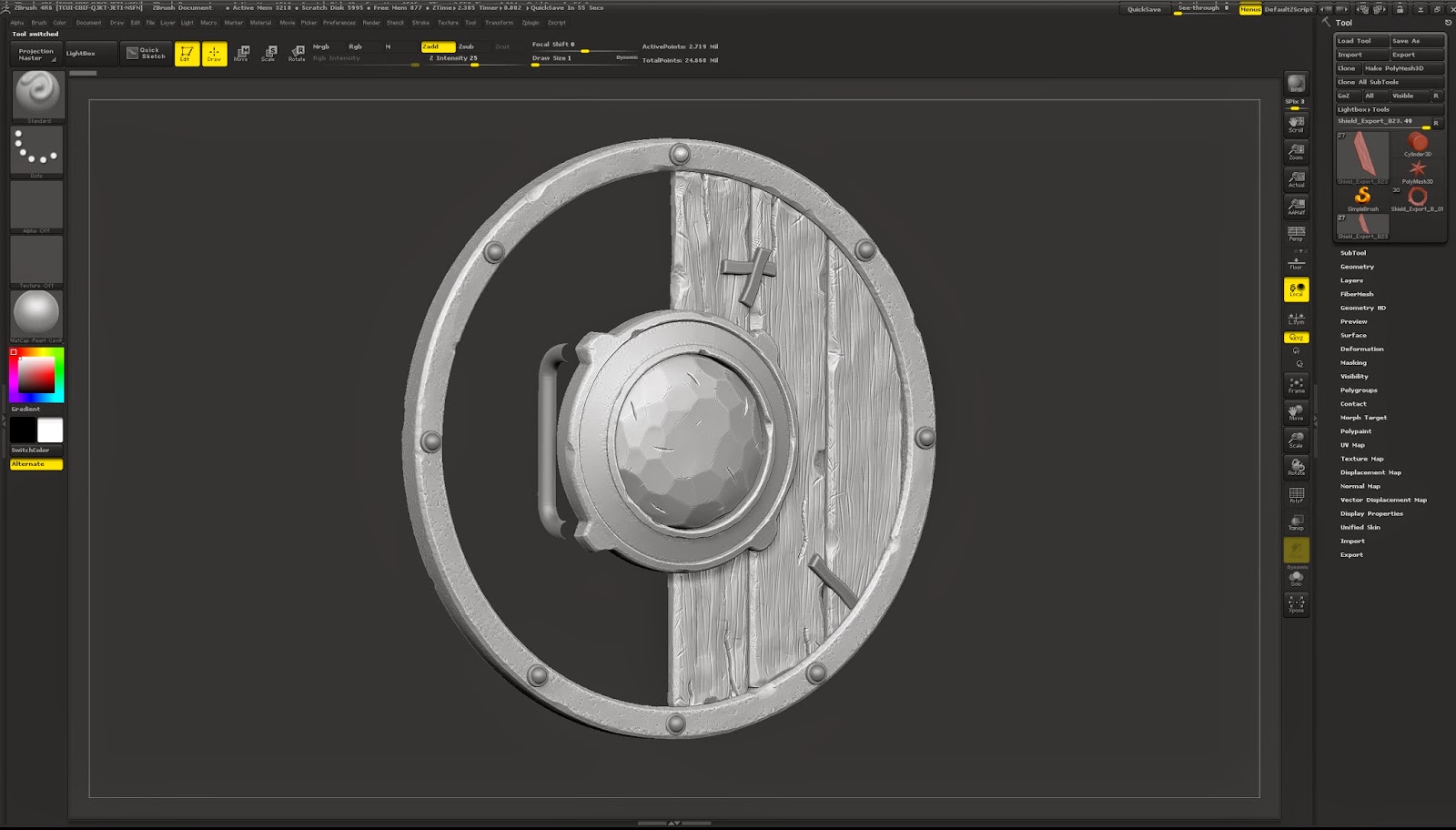 I thought I went a little to crazy on the wooden plank grooves so went back and edited them, While also adding in more detail. 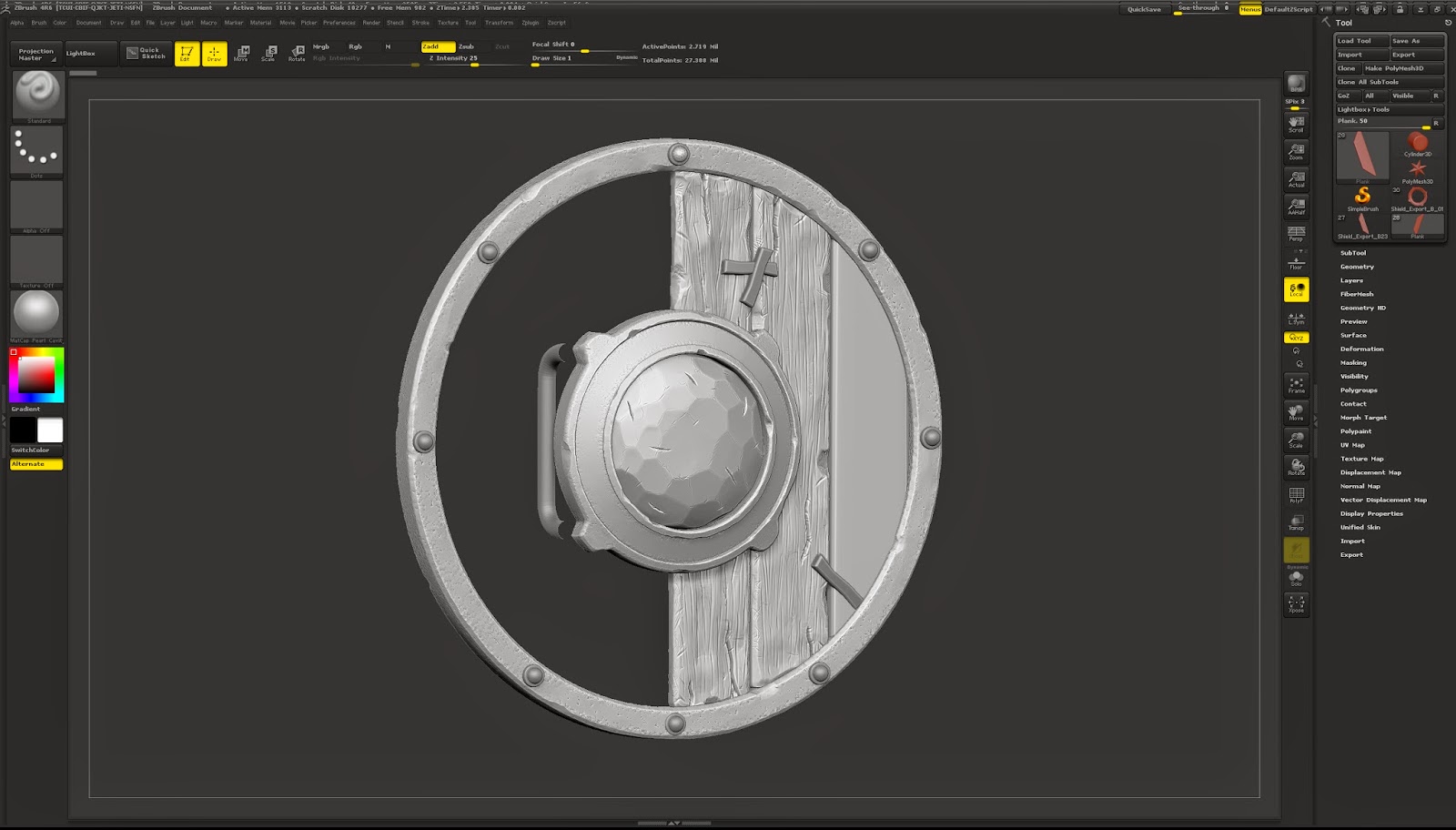 However came across an issue with the third plank where the layers would save the information I changed so have decided to just redo the whole process again, Practice makes perfect. 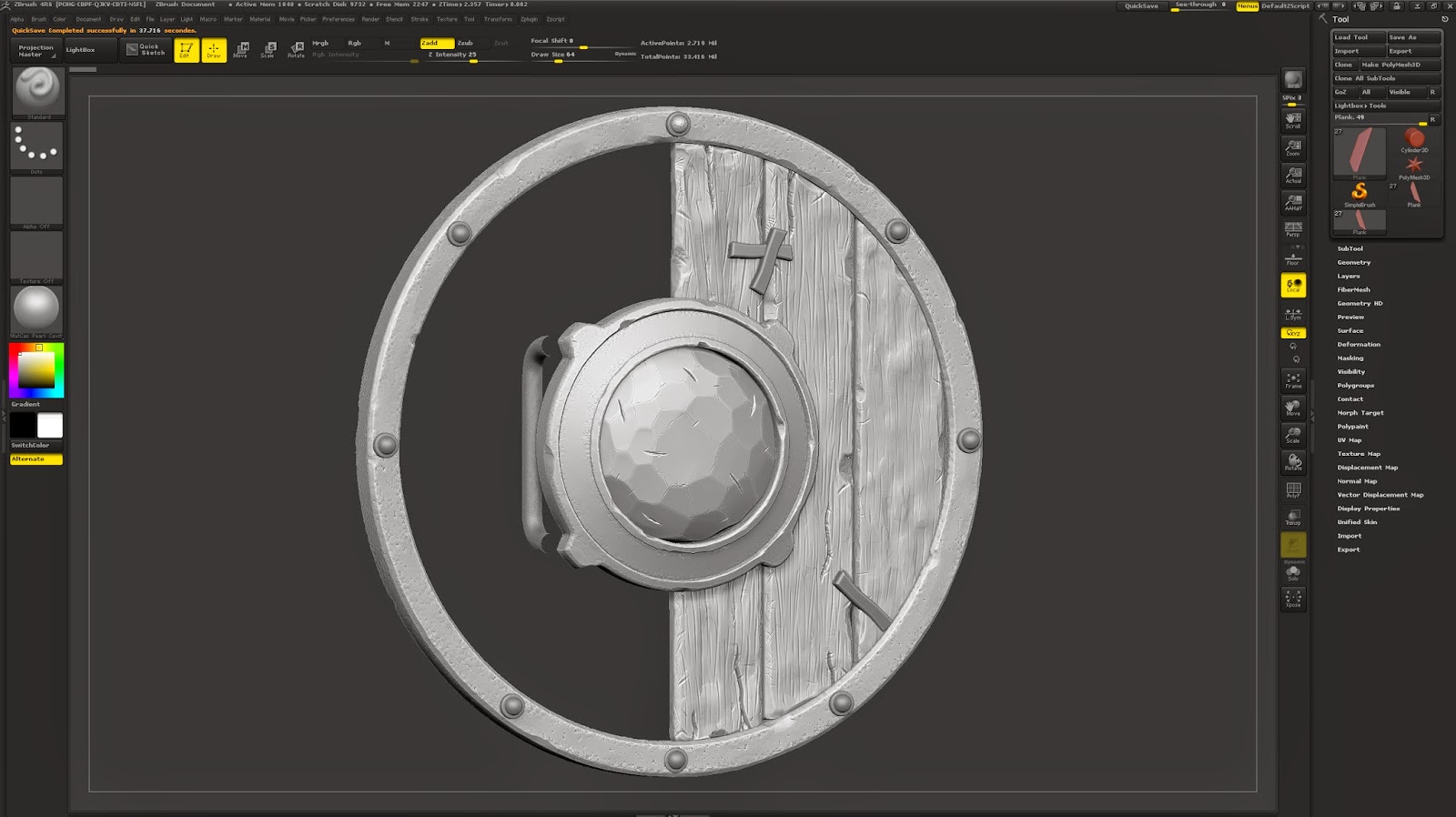 Well I started re-sculpting the small plank on the far right using the same technique as before. 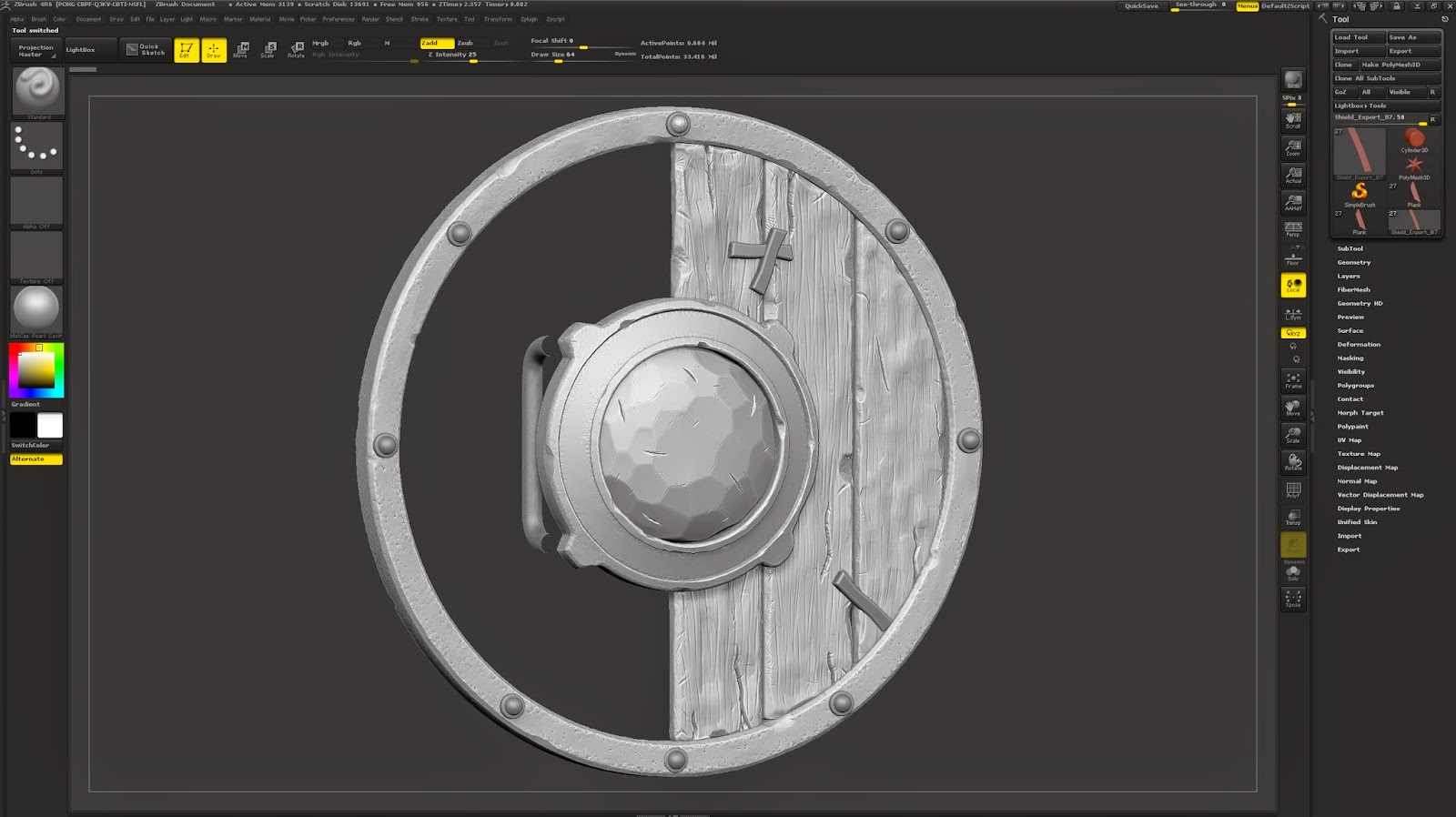 Added the final major cracks to the small plank to match the others and add detail. 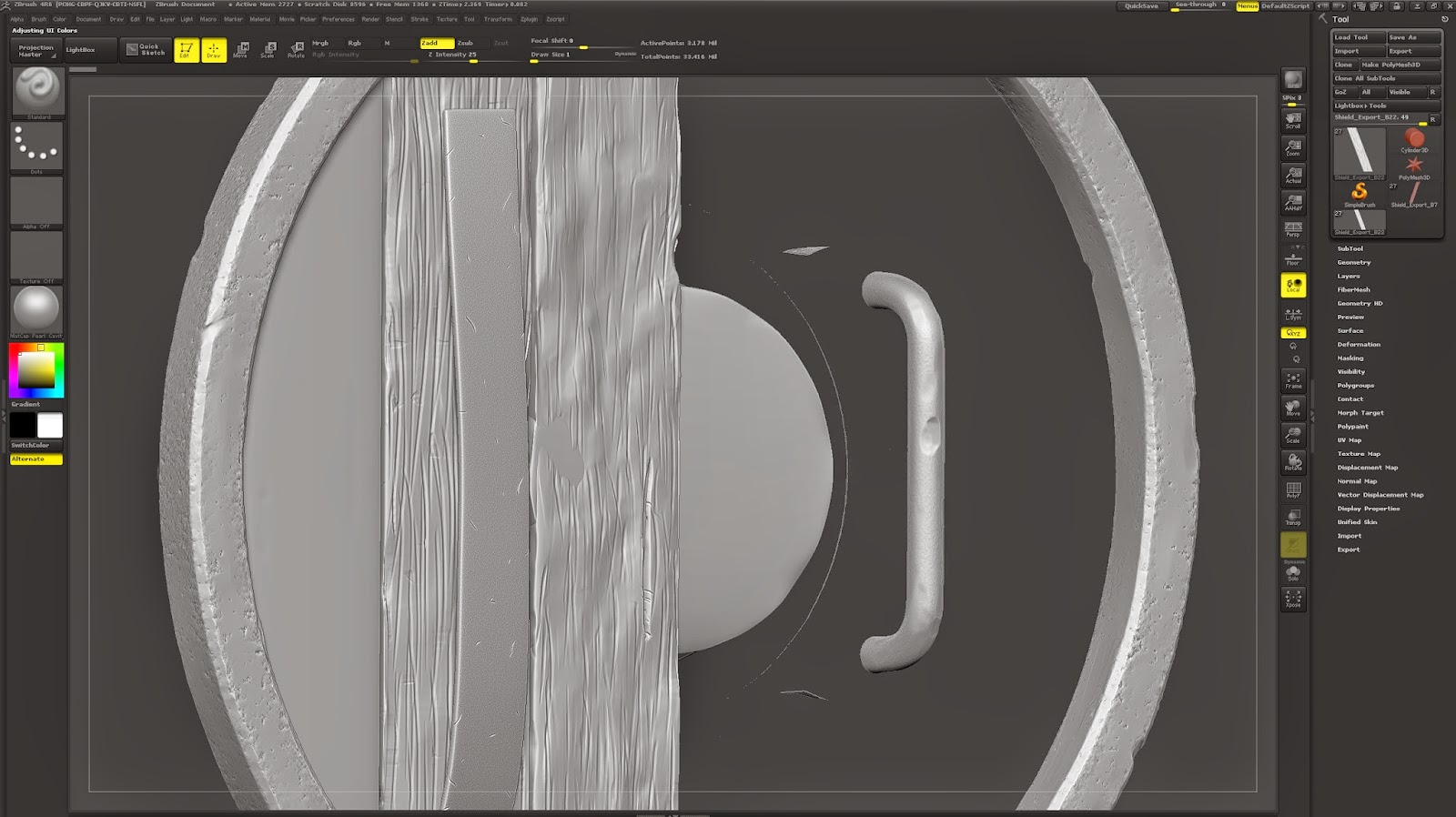 I moved onto the back of the shield and created some noise on the leather strap and also used the crack brush to add small details. Then followed by creating some worn metal and damage on the metal handle. 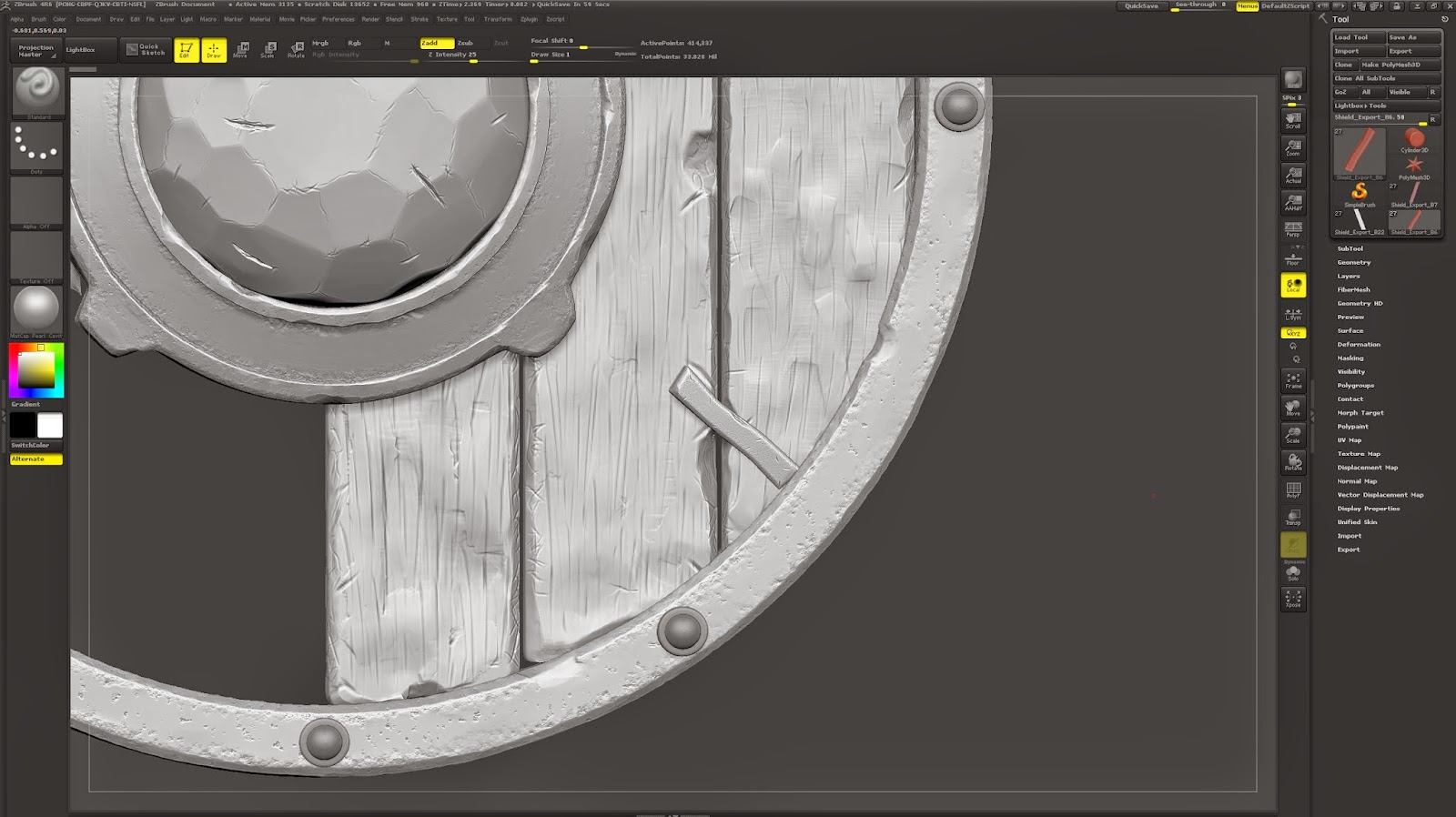 I used the same technique for the small metal brackets as I did for the leather strap found at the back. 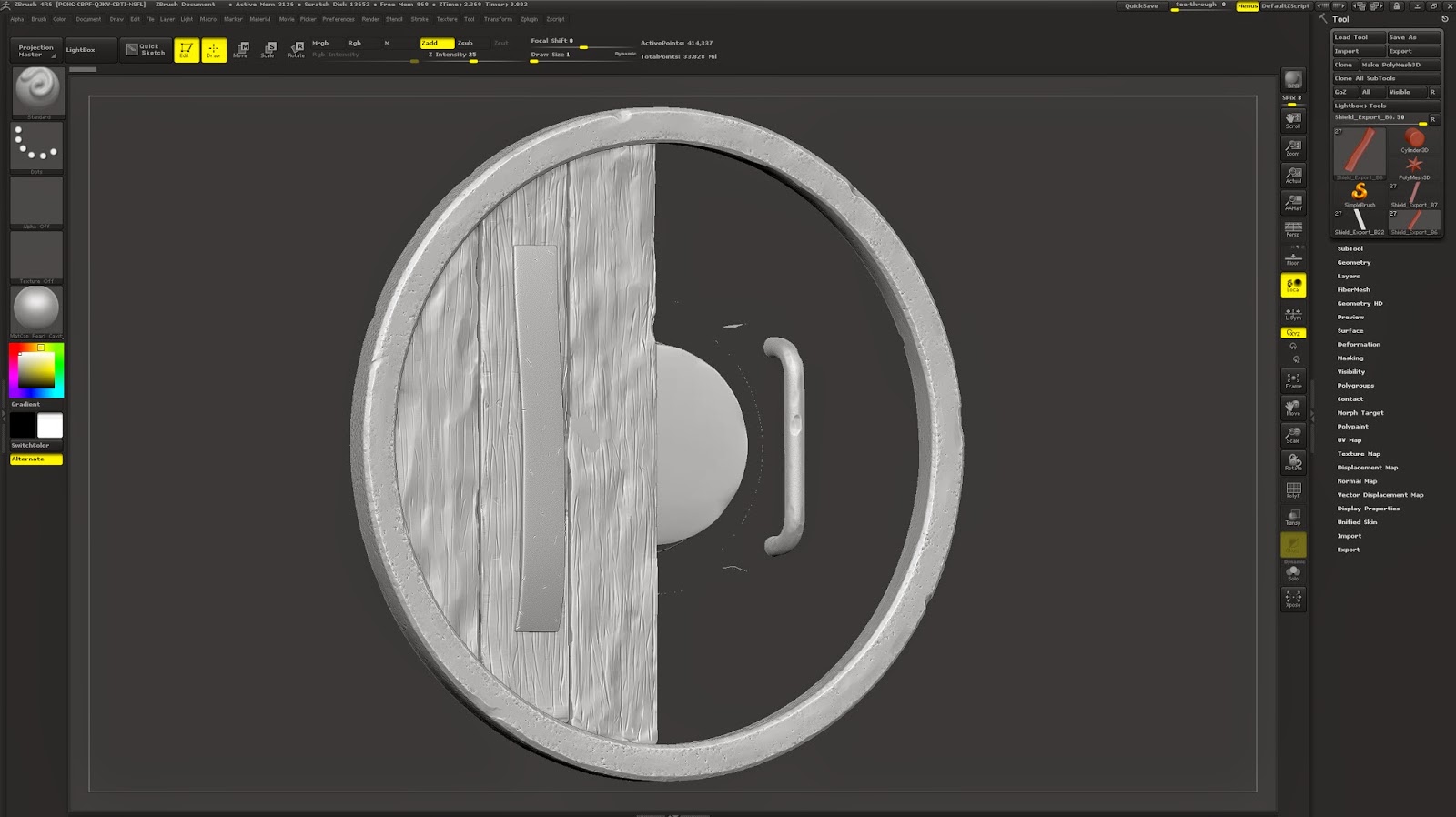 I then moved back onto the wooden planks to refine and tidy up the back facing plank faces. 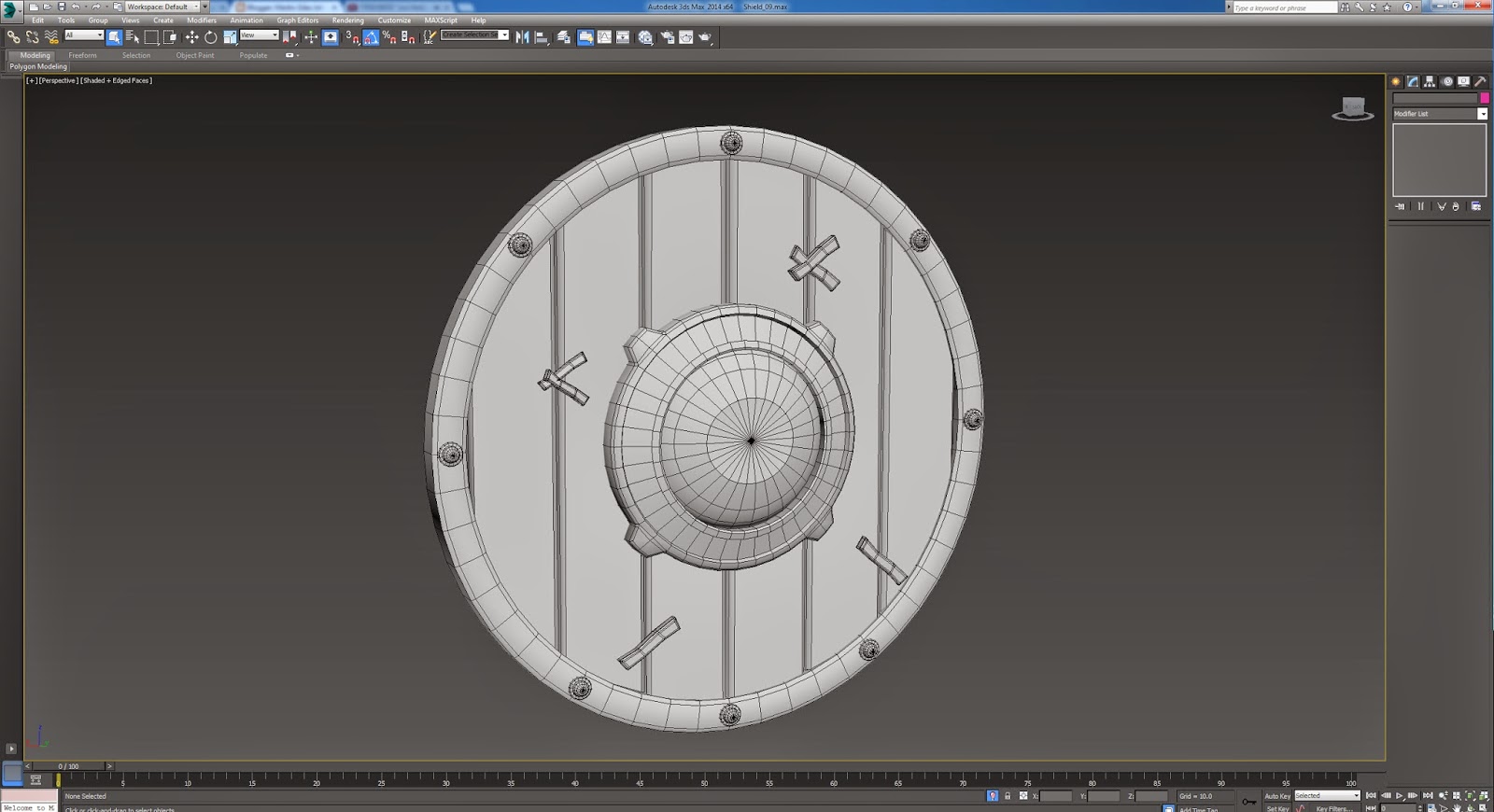 I then exported the mesh piece by piece and exploded the low poly mesh to bake using X normals. 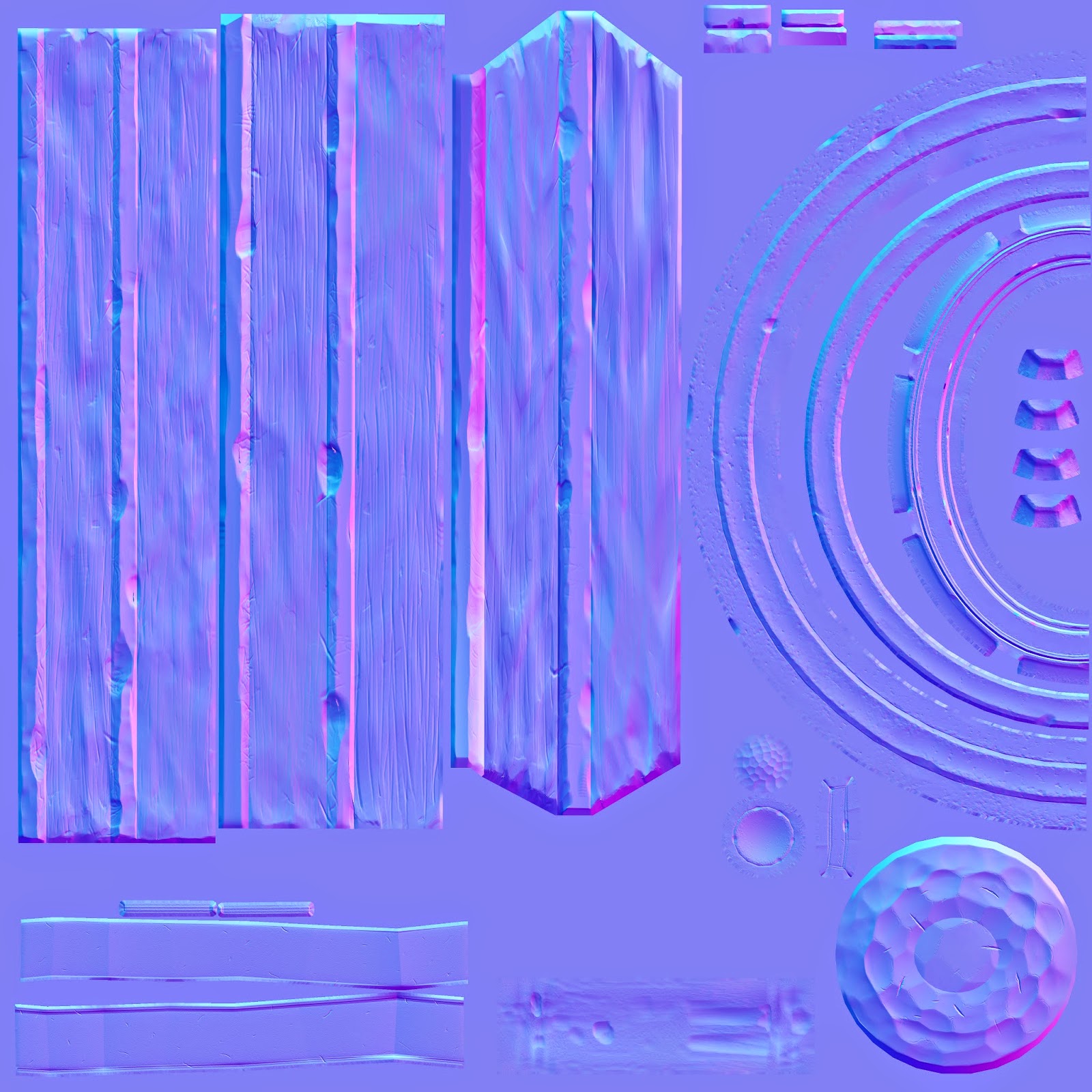 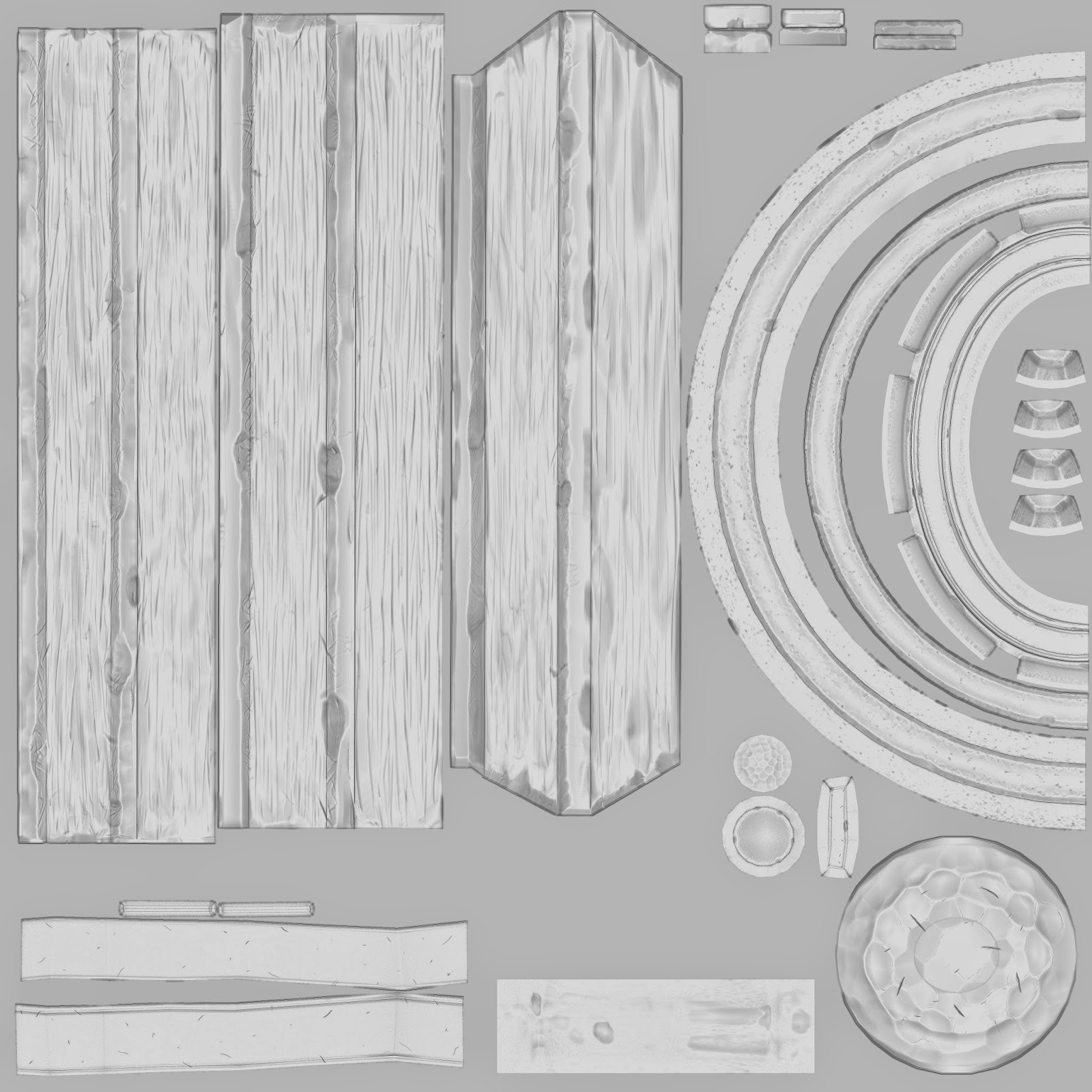 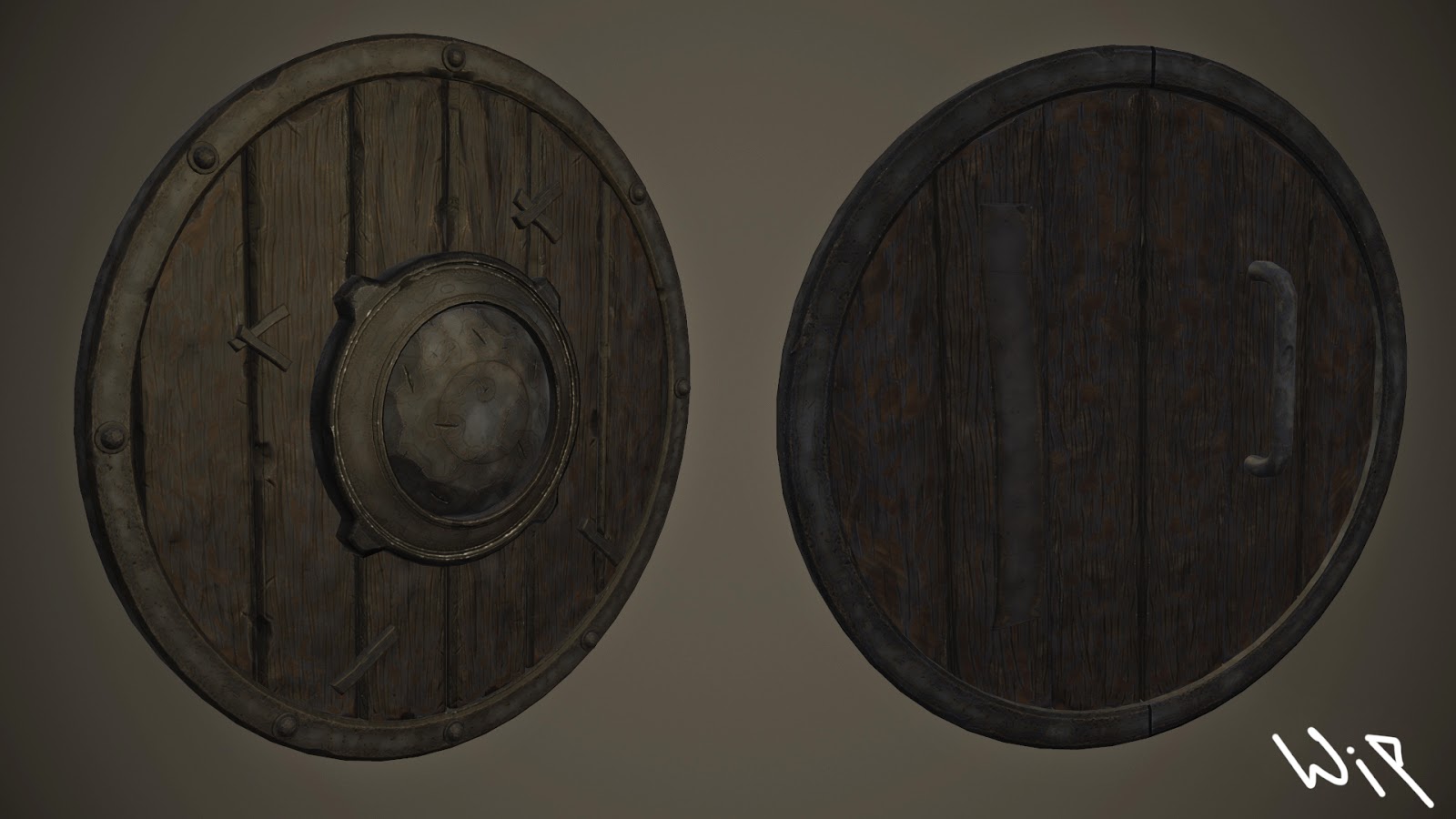 WIP of the Shield Posted by Martin Giles at 10:41 No comments: