Once I done a full run down of things left to do on the interior, I came across the meshes I created quite late in the project the interior light and rear view mirror. For the light I used the same shaders as the other lights within the room. As of the mirror I used a mid black shader and I created a reflections shader using a scene capture cube. The process can be seen within the images below. 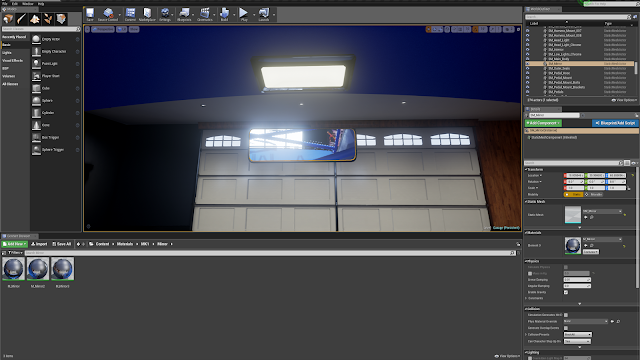 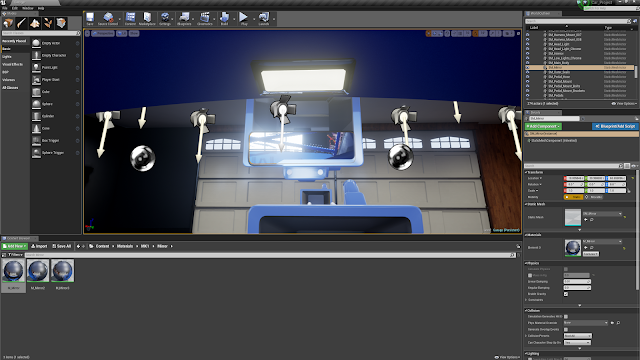 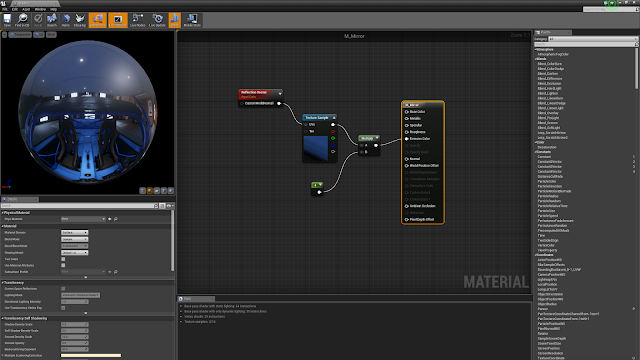 I increased the default value of the cube map as wanted the image to look more crisp. 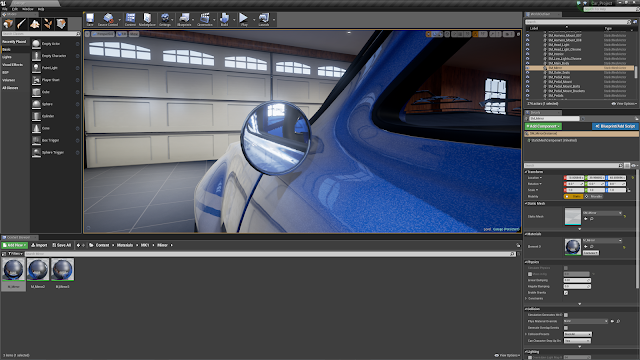 I duplicated the shader and create two new scene capture cubes to create the same effect for the wing mirrors.
Posted by Martin Giles at 22:03 No comments:

I then began to create the interior textures for the objects inside the car, once again I made a few mistakes, however I did learn them and will never do them again the major one not making sure that the ddo project was set for UE4. However one texture I will like to share with you is the carbon fiber one as done is from scratch in max through to PhotoShop and finally finishing in Unreal. 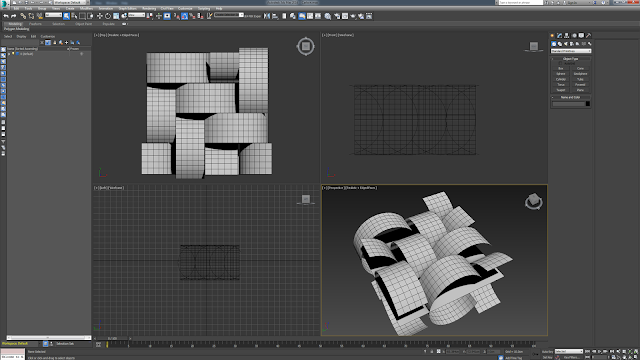 This is the mesh I created within max as you can see its fairly basic done using a cylinder removing the unnecessary polys and moving/rotating into place. Once I done that I ensure that it was also tileable texture. 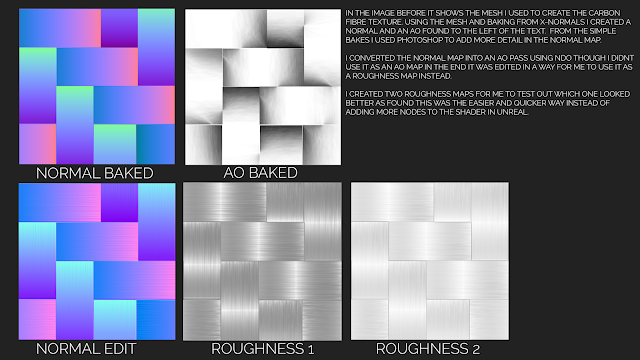 This image and text explains how I went about creating the process of the textures before going into unreal to build the shader. 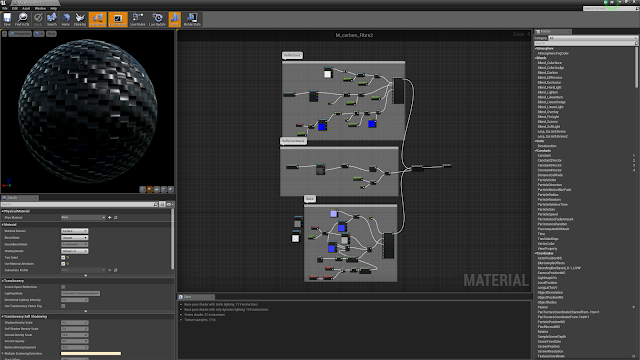 This shader was built up of three sections one the base to which I used my textures, then created a reflections mark and also reflections blending them together for the reflections I used a scene capture
cube as well for realism. 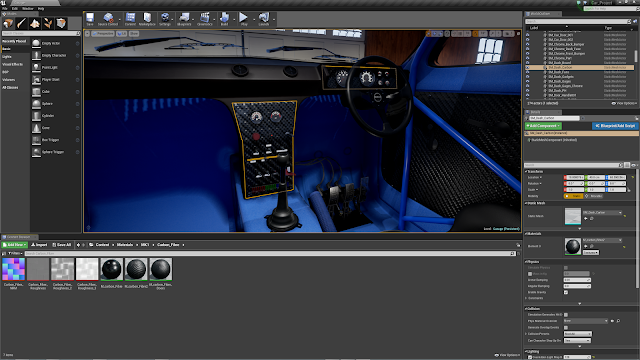 This Image shows the shader applied to the objects. 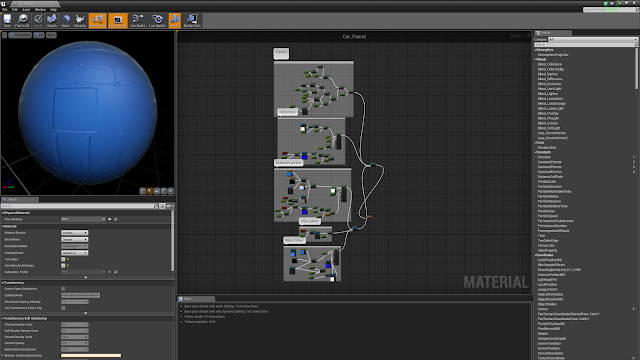 The next in the check list for me to do was create the interior paint shader as I needed it to be slightly different to the exterior one as needed it to be more Matt in appearance. I also needed to add some fine details for this I created a normal and ao map in ndo. 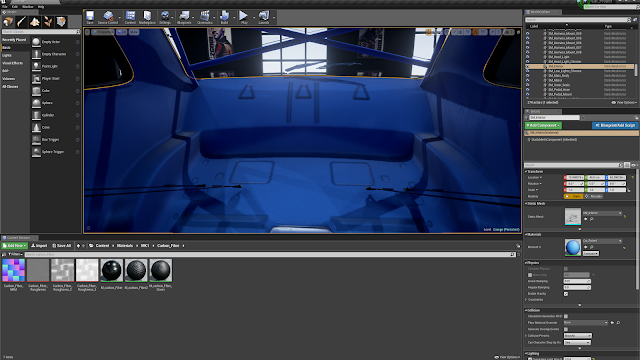 This Image shows the shader applied. 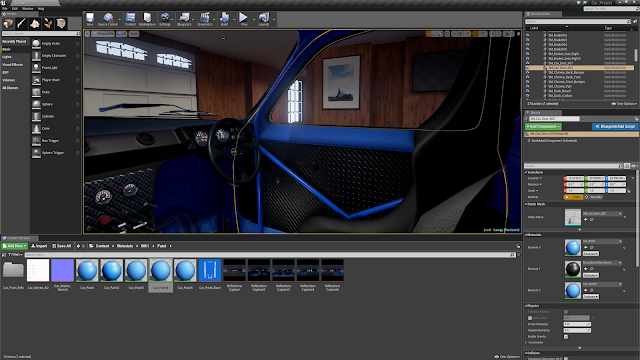 Another shader was made again for the doors as needed one with the same properties as the interior paint body but with out the normal and ao map.

Posted by Martin Giles at 21:34 No comments:

Through this project I have learned so much and even though I had on many occasions have to go back and forth with importing the car mesh  as it had many technical issues such examples range from mesh topology, material ID or with either the light map or texture UV.

As I used a script for the first light map pass I found that it gave artifacts over the objects to solve this issue I found a simple way of copying the UV set for the textures to the light map set. This solved the issue I was getting. 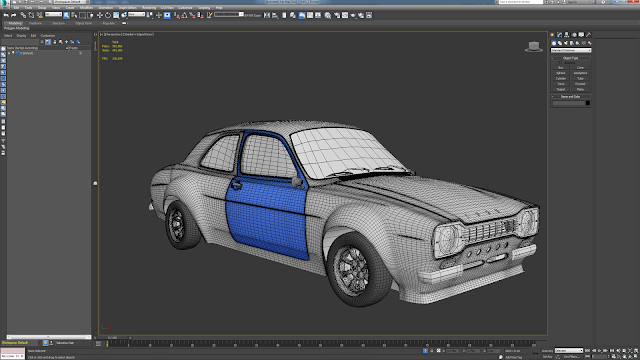 This image is a prime example as I realised after importing the mesh that I would then need to create a multi sub object material for the door as this will eventually have 3 different shaders attached to it so from that I went back and amended the object. 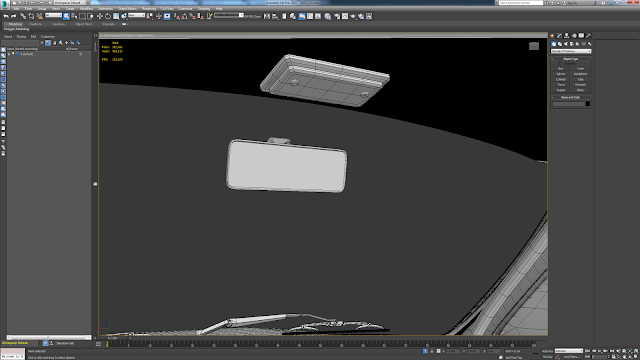 From the technical issues I was having with the car mesh I also realised that I missed some key assets to the car model including an inside light and also a rear view mirror. The interior light was a duplicated mesh from the orange lights at the front of the car with a few edits made. 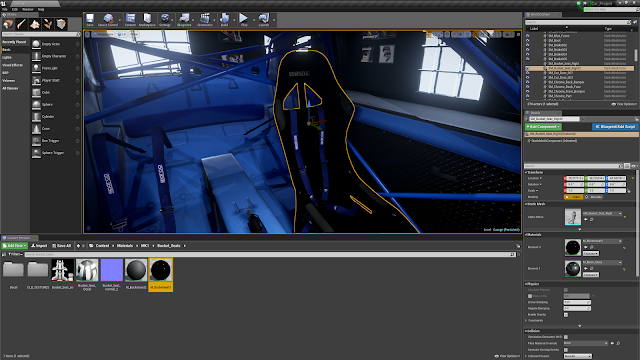 I used a mixture of texture software for this project mainly focusing on ddo and ndo with photoshop adjustments etc. after creating the seems of the bucket seat in Zbrush I exported the normal map and used that as a base as well as a ID and AO map for ddo. From completing the texture I imported the textures and created a basic PBR shader for the bucket seat. I soon came to dislike the textures I produced. 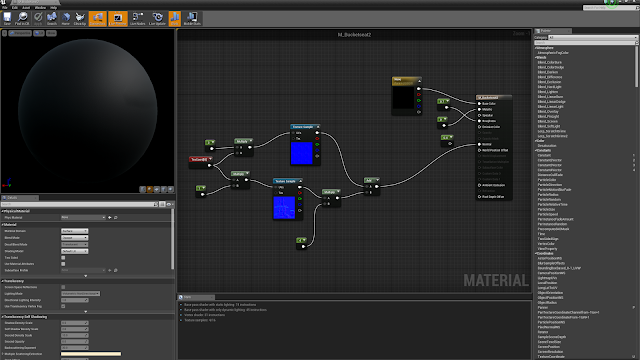 I used the skills I have learned throughout the project and decided to create a simple shader that emulates the effect I wanted to achieve. This was done using the original normal map from the sculpt I did of the bucket seat as well as the normal paint map. Them to blended together with a vertex colour node and simple constant node for roughness and metalness. 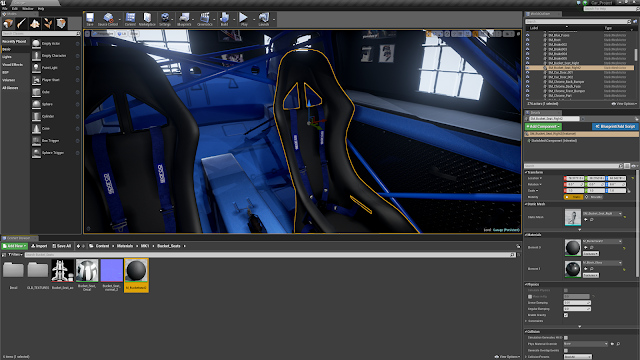 The Final effect of the bucket set can be seen above with the shader applied. 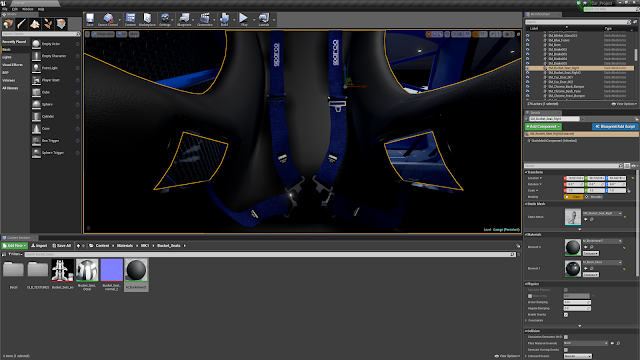 I also went back and finished off the harness texture as this was missing the logo sections of the object. As for the metal parts I used the metal master shader I created previously.

Posted by Martin Giles at 19:47 No comments:

From the basic setup I had created I was able to start adding depth and character to the scene. 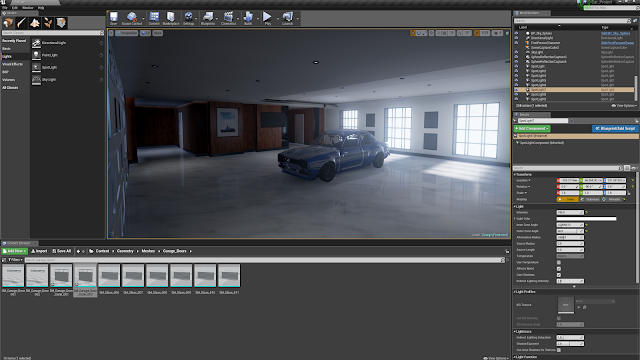 I started the process by adding the main element of the project the car model to the center of the room making it the main focus and also allow the player to freely move round the car with no issues like clipping etc.

I then began the production of the shaders creating a range of gloss to Matt finished in white and black, while creating unique shaders for certain objects such as the floor and the wooden wall. I also managed to merge the old car shader from the old project into this one so I didn't have to start from scratch. 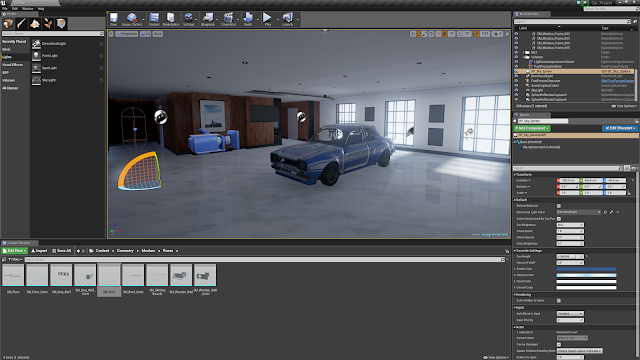 I then went onto creating metal like shaders for use of a range of objects one being a mater shader to which I created a range of instanced shaders. For the floor I created a marble texture/shader from an image offline creating a albedo,normal,gloss and ao maps.

After getting a more defined look of the garage I got rid of the quick light setup I created previously and developed a more polished feel to the environment. I scattered some sphere reflection captures around the room. While keeping to the realistic approach added a spot light to each of the light meshes in the roof.

I also added a first person camera to the scene for use later on in the development. 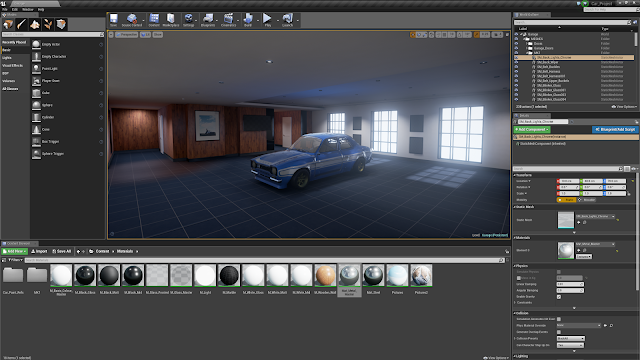 I ended up tweaking the lights multiple times before getting the look I desired. I also went and redone the floor texture as I wasn't happy with the marble look and went with dark tiles to match the feel of the room more. 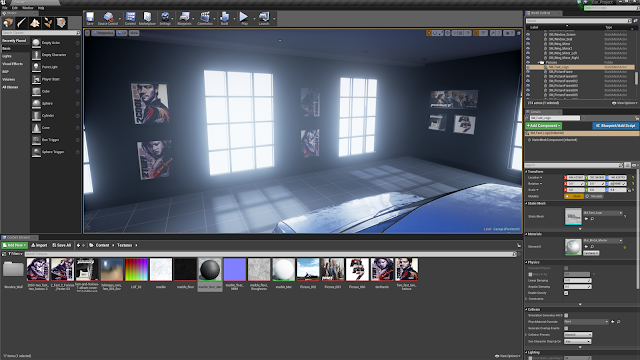 For the picture objects I kept to the theme of fast and furious. Gathering sources from online and uving them to the objects. As you can see I also moved some of the pictures around this was due to wanting to make use of the wall space and also better design in my opinion.

I came back to the walls as well and created the dark grey shader I wanted for that side of the room. 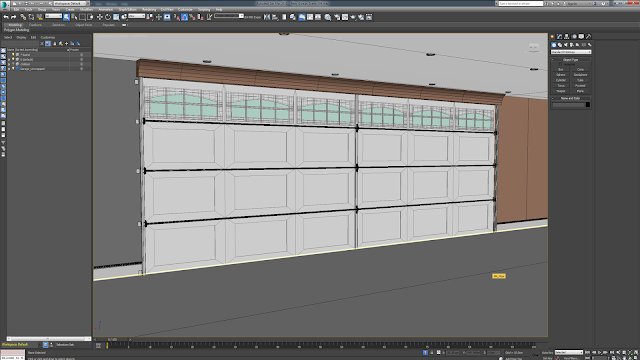 I felt within the scene the garage doors looked plain and there wasn't much detail in terms of real life usage. I solved this by creating a rail system that slides the doors up and into the roof via the wooden curved slot. This was a design idea as did't want the rail system to look out of place to the rest of the scene by keeping it simple and clean. 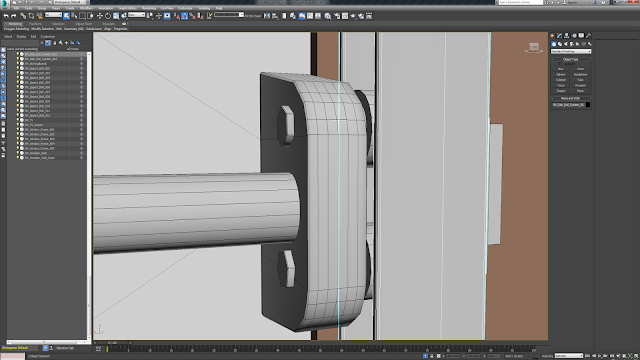 I made sure I went into enough detail without going to crazy on the topology. 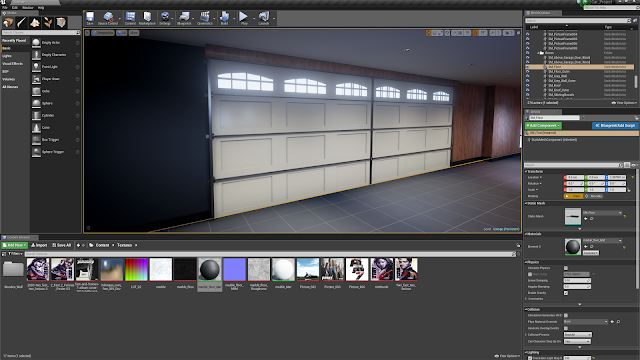 This is what the rail system looks like in the unreal project with the rail system itself being a steel like material wile the above has two shaders with the inside being black for darkness and outside being the wooden wall shader.

Posted by Martin Giles at 21:14 No comments: