The final stage of the modelling was unwrapping the model.  I started the way I have with the other two stages with the blade section. 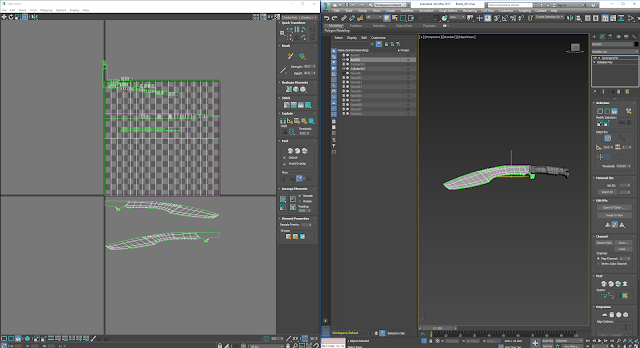 I began with breaking the two major faces off this was the bulk of the work done on the blade section. The major work was the top and bottom sections of the blade. 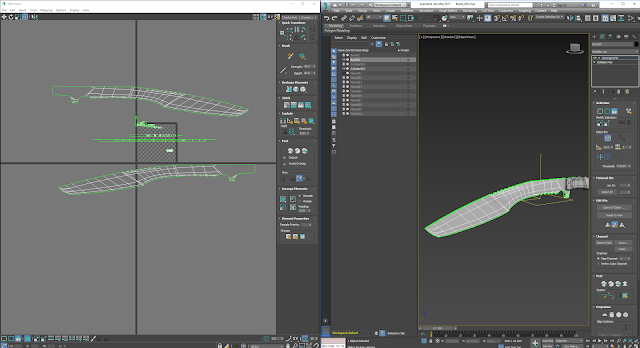 This was the unwrap of the blade mesh after I completed the top and bottom sections. 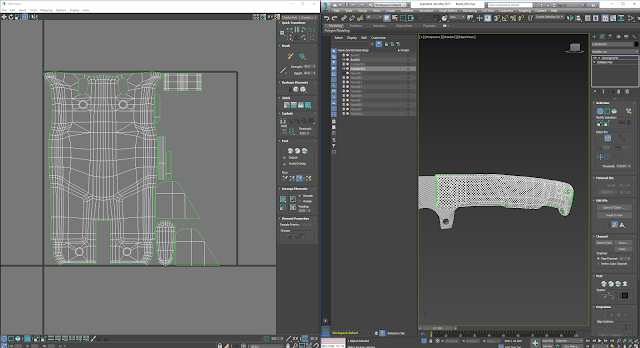 I moved on to the handle section of the blade this was simpler than the blade to complete as the bulk of it was one UV shell. 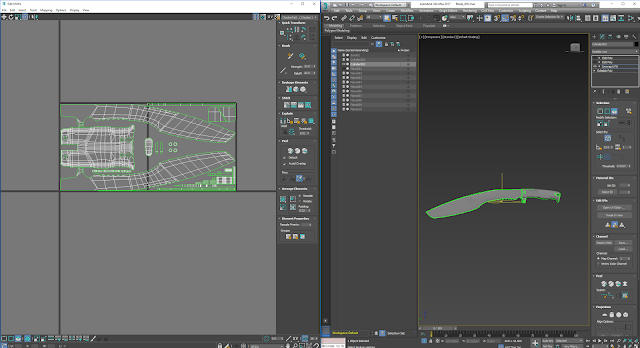 After completion of both the sections of the blade I merged the mesh together, this was so that I could do two things one was to get the blade and handle to fit in the UV space desired 2048x1024. I also used tex tools to get smoothing groups from UV shells. 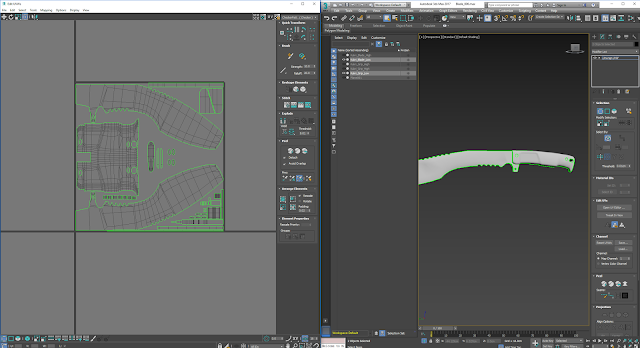 Lastly for the export I had to fit the UV into 1 by 1 texture coordinates. The reason for it was for the texturing process as going to use substance painter which only accepts 1 by 1. However can change once in SP.
Posted by Martin Giles at 23:02 No comments:

Now becomes the production of the High Poly one of the reasons for this project. As personally I typically use the the turbosmooth and hard edge loops to create my high poly, However Tim shows the crease edge and open sub division high poly technique. I found this really easy to understand and useful. I could see why some artists like to use this technique. But as with most techniques there's pros and cons. 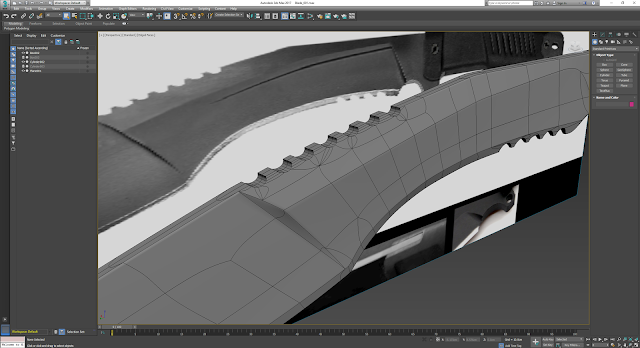 This image shows the low poly mesh that I'm using as a base to create the high with the use of open sub division modifier on it. I selected the edges needed and ensured they had high crease values found in the edge selection options. 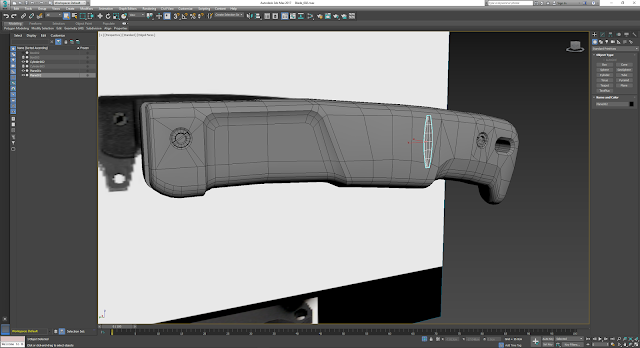 After finishing the blade I decided to create the blade handle indent parts this was created from a plane and modelled into shape. I then rotated it into position and duplicated it several times while scaling where needed to get the desired look. 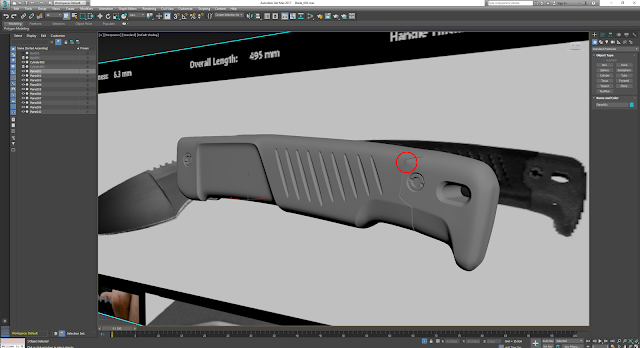 I then went back to creating the high poly mesh of the handle base using the open subdivision method. Went smoothly until I came into an issue where I created a fine extrusion to split the handle into the two material parts. I had to tweak the low poly mesh to get the high subdiv high poly to line up the way I needed it to. 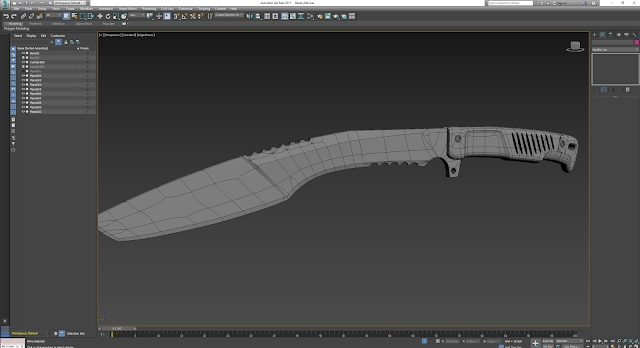 This was the final out come of the high poly mesh.

Posted by Martin Giles at 22:48 No comments:

I wanted to do this tutorial with two goals in first one expanding my knowledge on substance painter and secondly I noticed that Tim Bergholz  (Chamfer Zone) used a different technique than usual to create the high poly model so thought I could learn it for future productions. 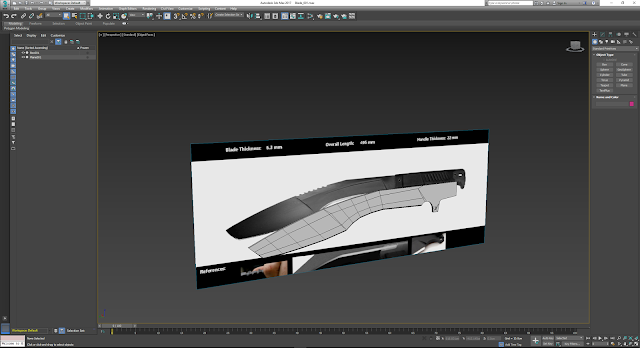 Started by using the reference image provided and began blocking in the blade Topology. I ensured that the middle of the blade was on the 0,0,0 to help get a perfect symmetry without needing to tweak it every time. For the whole part on the blade I created a cylinder and enabled snap to vertex mode and used the cut tool to create the cylinder on the blade mesh. After that I deleted the reference cylinder tidied up the topology. I also extruded the cylinder I created to the middle of the blade to align it with the rest of the mesh. 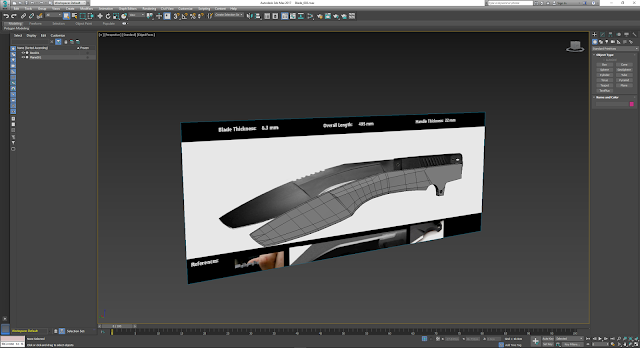 After the main block out I defined the blades shape further adding the thickness and edge detail in the middle of the blade. 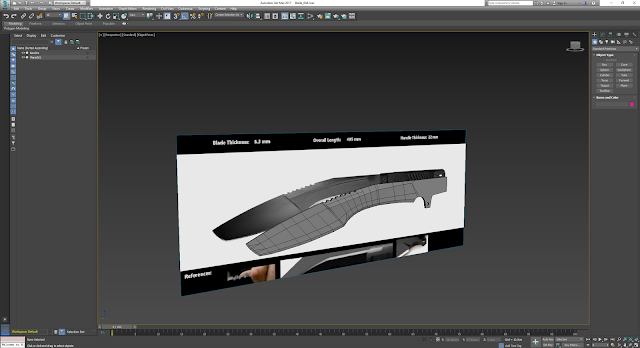 To create the teeth part of the blade I created a cylinder and duplicated it several times while lining it up to the reference image behind. After that I used the boolean technique and fixed the topology errors that went with it. 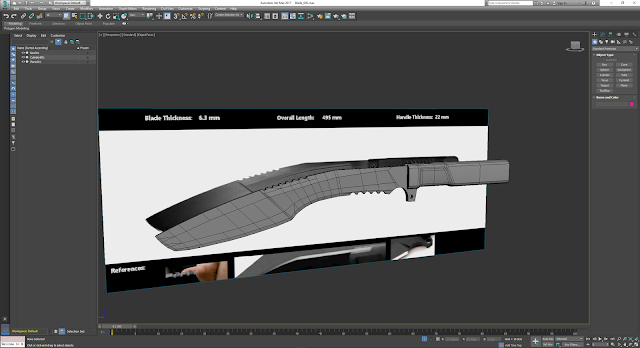 I used the same technique for the below teeth section of the blade. Moving on to the handle I started with a simple block out mesh I also used the straight handle reference image as I could then later use a FFD modifier to bend it slightly. 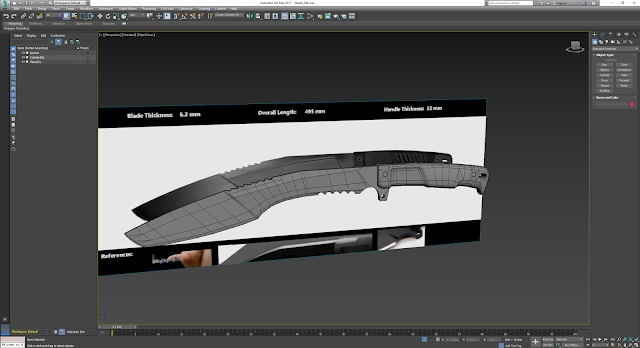 I then defined the handle more by adding more subdivisions and also creating the sections for the bolt parts on the handle. I then used a FFD modifier like I said previous to bend the handle slightly. 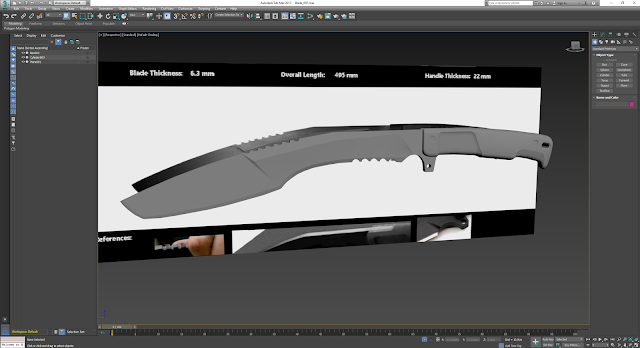 The image above shows the final low poly with rough mapped out smoothing groups.
Posted by Martin Giles at 21:18 No comments: